Yesterday was a great day. Charlotte headed off by herself for the first time ever, dressed, booted and independent - and then later that night we went skinning together up the hill by head torch for the first time, with a Silvretta Kidz rig and my tiny kicker skins. She loved it. One down, two to go - although my three year old boy is not showing much interest as yet. I'll just have to work harder. Some would call it child abuse, but their worlds are probably flatter than mine.
Sometimes, if you don't have great expectations, the day will surprise you. I had booked Roland (who took me up Mt Blanc) for the day months back, however he felt I'd be better served by Christophe who is a bit younger, fitter and enthusiastic. The day was cloudless, so at least we had that as we headed off into the worst snow conditions for December that I have ever seen. Whilst the cannons and machines have kept most of the pistes passable and OK for the teaching of children, the off-piste is truly woeful.
After a rendezvous mix-up, we scooted over to Meribel, and then up and over into the the Val Thorens (3rd) valley. With nobody about, several speed records were broken on the corduroy. We caught lifts up to Pointe de la Masse, and that's basically where the fun started.
We dropped due west into untracked wilderness and were surprised to find pockets of ankle deep fresh, despite it not having snowed since November.
La Vallee des Encombres is basically the 3 valleys' fourth (secret) valley. Headed by the Grande Perron des Encombres, it is a vast unspoilt area that is seldom ventured in to. We dropped 800 metres of cruisy linked turns before climbing back up to La Gratte. Things looked so good from the summit that we decided to drop another 800, before climbing back up to Mt Geffriand, which is perfectly placed for amazing views of La Meije and Les Ecrins to the south, and the Mt Blanc Massif to the north.
We dropped 500 down into the vast Geffriand vallee, and then climbed back up the opposite ridge to get nearly a 1000 vertical down to le Bettaix. The last 500 were hard going with a feeble snow pack and rocks everywhere. I snapped one of my Komperdell poles, and am still too frightened to look at my ski bases.
It was fantastic to see another sector of the Alps, and not bump in to another soul. A great day out which we finished off with beers and pasta in Meribel before the final gondola home.
Merci Christophe. 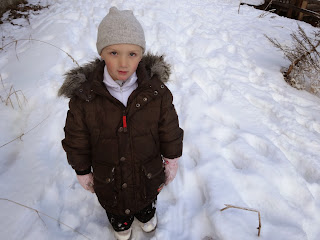 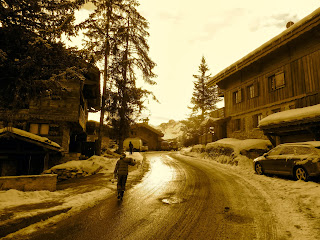 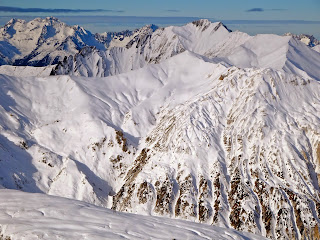 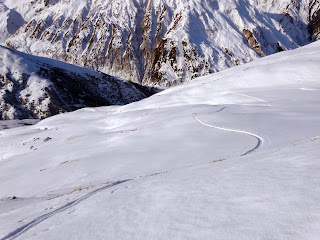 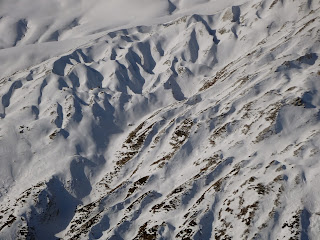 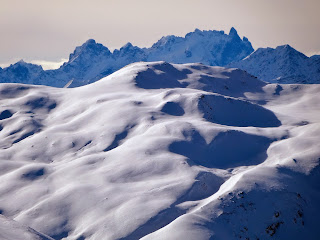 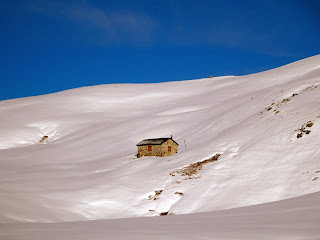 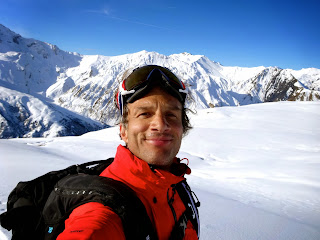 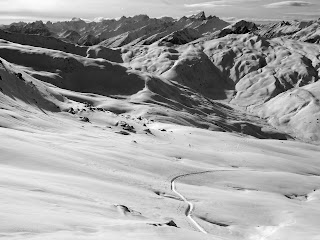 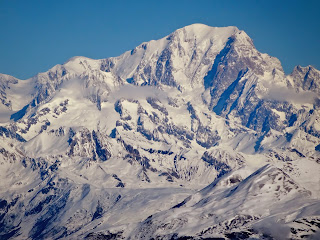 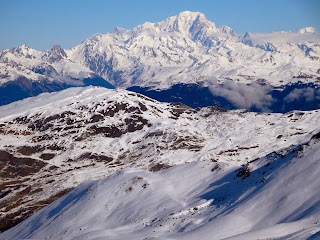 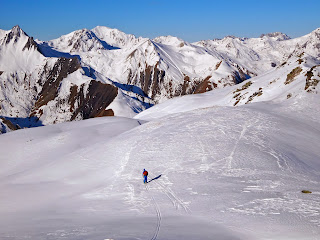 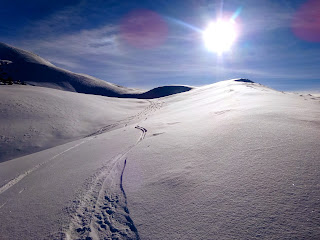 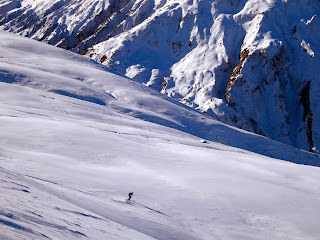 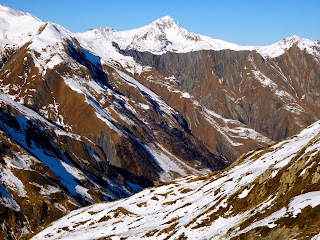 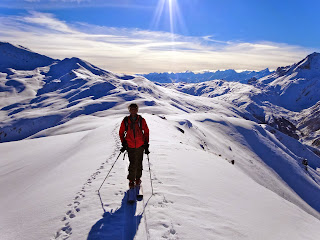 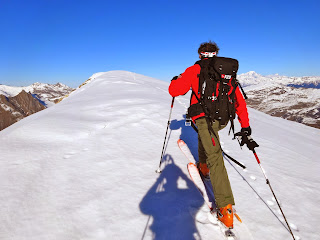 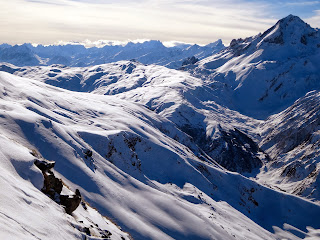 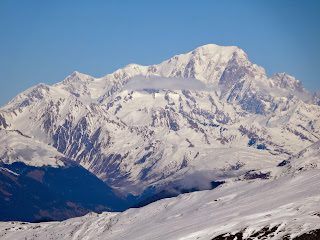 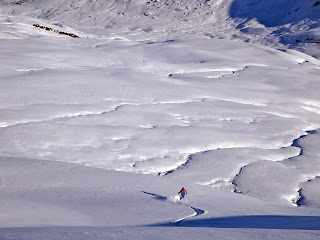 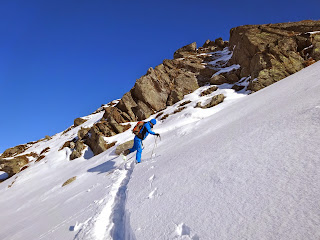 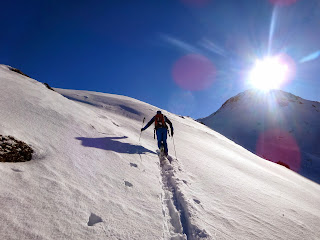 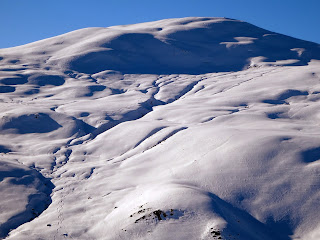 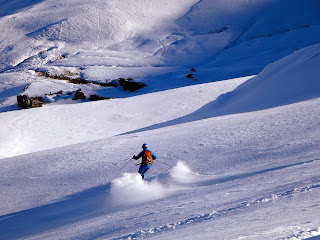 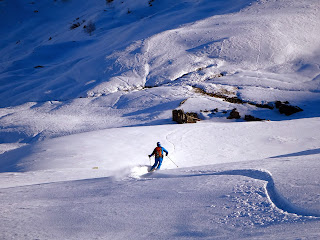 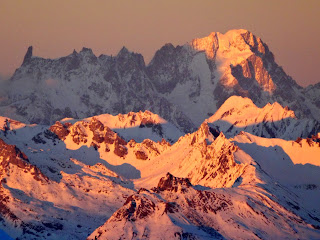 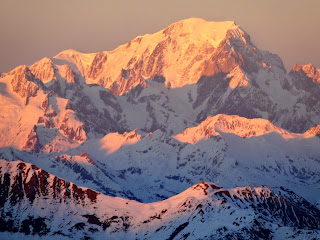 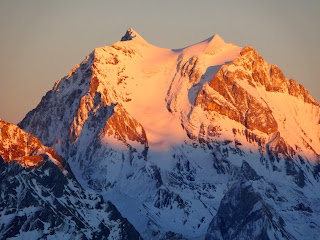 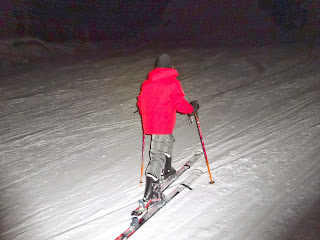 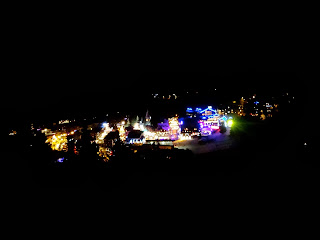