A recurring dream: the night before my final exams and I am woefully underprepared. I have evidently flittered away the year on parties and recreation. The fear though is not simply of failing, but something far worse: shame, and the utter futility belying an imminent and assured catastrophe; the most ghastly self-inflicted horror possible… Then I wake up, and breathe a sigh of relief as I eventually realise that my last exams were more than a decade ago.

As my alarm went off at four a.m. Saturday morning, I was experiencing similar premonitions. I was so undercooked for a sixty-kilometre ultra-marathon circumnavigation of Wilson’s Prom that it was all going to end badly. I was walking out onto a scaffold and my children would be fatherless by the day’s end. At the very least, the pain was going to be exquisite endless and unfathomable.

Most folks could complete a marathon if they tried. How do you run a marathon? Well, you start – and then you just keep going until you’re done. The reason to train then is not necessarily to finish, but rather to finish well, in a respectable time without injury and minimal pain. And if you haven’t done the kilometres beforehand, if you’re not ready, you can always postpone things. Unless of course your ego has broadcast this run as some great magnanimous fundraiser. Then you’re locked in.

My training was going well until March when I foolishly tried out the latest fad in running shoes on an otherwise pleasant half-marathon and blew my right knee. On our Easter Holiday I blew my knee again and then caught dysentery (and possibly Dengue), which left me prostrate on a beach for several days with cramps and hideous welts up my backside. As well as my dignity, I lost five kilos, mostly from my previously toned legs. Then on the Monday before the big run, one of my children gave me a cruel bout of gastro. I spent most of the week leading up to the race either in bed or next to the toot.

I now had to decide on the more important example to set for my kids; that of never quitting, versus that of negating risk verging on the foolhardy. There were others to consider too. With the weekend weather forecast as wet windy cold and vile, the Parks and Wildlife or SES would not take too kindly to some unfit and unwell middle-aged fool in lycra heading off into the wilderness. I could be putting the race organisers and my fellow competitors at risk.

'But daddy, you're sick. Why are you still running? That's just dumb!' My oldest child, the voice of reason, who evidently now needed to be versed in the oldest lesson of a tough mind and big heart subsidising for a feeble body.

After a coffee and light breakfast, I was soon on the road to Wilson's Promontory National Park. I had only started eating again the previous day. Having performed a quick Google search of the most calorie concentrated foods, I had spent yesterday afternoon consuming nearly two kilograms of peanut butter washed down with lager, which was actually quite challenging in itself - I basically had to force feed myself like a foie gras goose. Now on the road in the dark, I still felt wonky. My heart rate was twenty percent over normal resting, and I was clammy. Maybe it was pre-race jitters. Maybe I was still crook. Maybe it was the peanut butter and lager.

There were lots of others on the road, presumably up at this silly hour for the race. I overtook many of them, partly because I knew the road so well, partly out of spite as I knew that they would soon be passing me on foot, and partly because I needed to go to the toilet again. I nearly hit a deer. 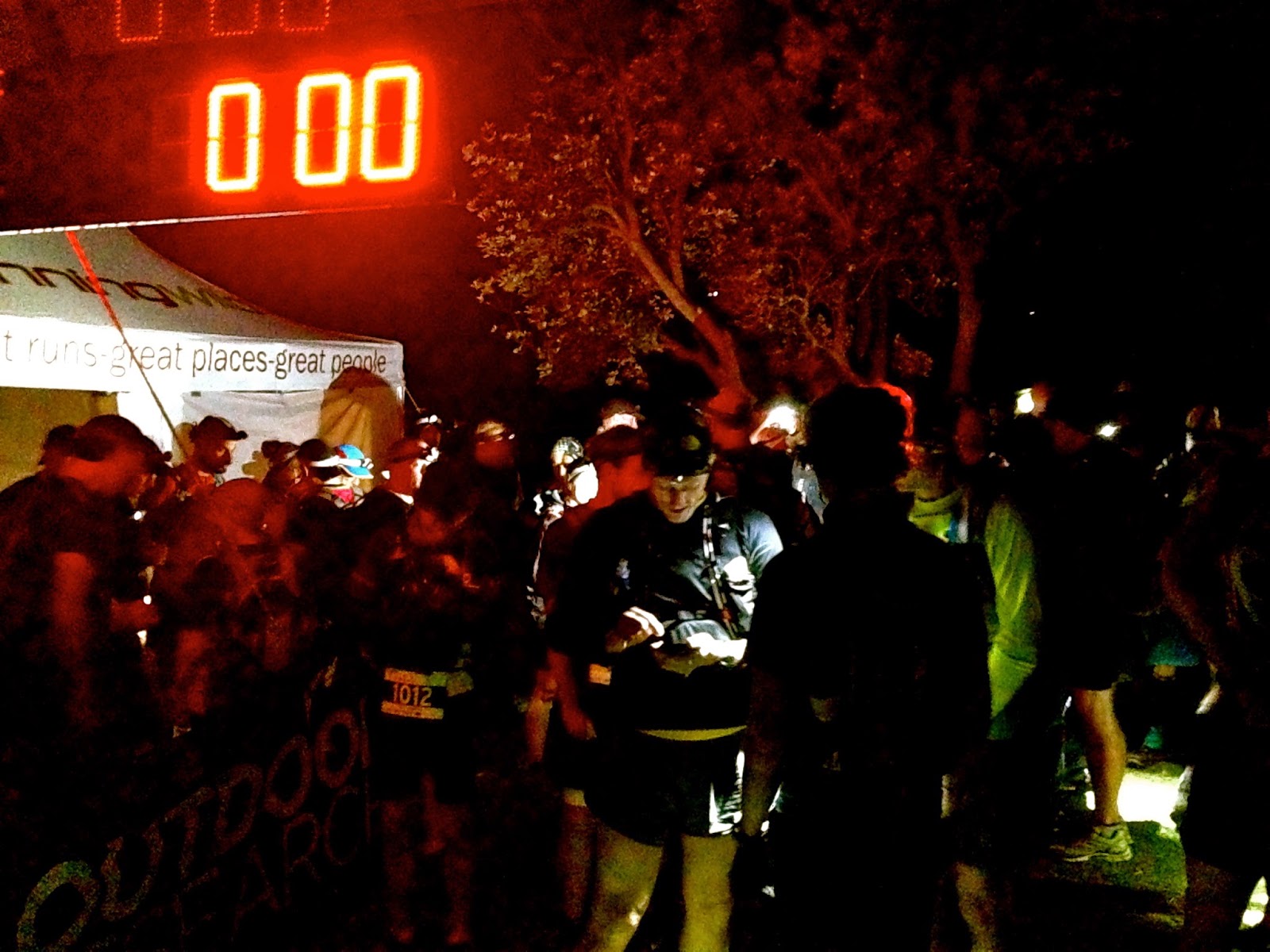 At marshalling, there were a few familiar faces and Paul Ashton's hearty voice booming through the crisp morning air. I got my bib, ran a gear check, went to the toilet a few more times and chatted. There were runners from every corner of the nation, including NZ. What I always find amazing is the number of folks from Melbourne for whom this was a first visit to the Prom. The most beautiful National Park on the Continent, with some of the most wild, pristine and beautiful beaches on the planet, and it takes an ultra-marathon to drag you here? More Victorians have probably been to Bali than the Prom, a couple of hours drive. It was the first place I'd brought my future wife on her first time in Australia, and we'd walked and camped in reverse what I was about to run, over four days in glorious weather. She'd scarcely believed how beautiful it was, or that we'd had it mostly to ourselves.

And then we were off.

The best races start at night, and I just love running in a pack of a hundred head-torches: it makes the usual adrenaline rush quixotic and surreal. To move regularly is to live better and live longer. The more you move, the better you feel, and the better you are. Simple facts. So runners are happy people, and this is the second happiest part of any long distance race.

Pretty soon we were climbing the road to Oberon. If I was going to pace myself to finnish there would be no uphill running, so I was happy to find others walking so soon. We passed several great gashes in the landscape from landslides which had prevented me running this race on two prior occasions. First light was soon filtering through the rain forest, and head torches were being extinguished like so many glowworms. And then Windy Saddle where we could finally open up the throttle for the long and winding trail through incredible forests and boardwalks passing glades of tree ferns, all the way down to Sealers which was calm and beautiful in the sunrise. 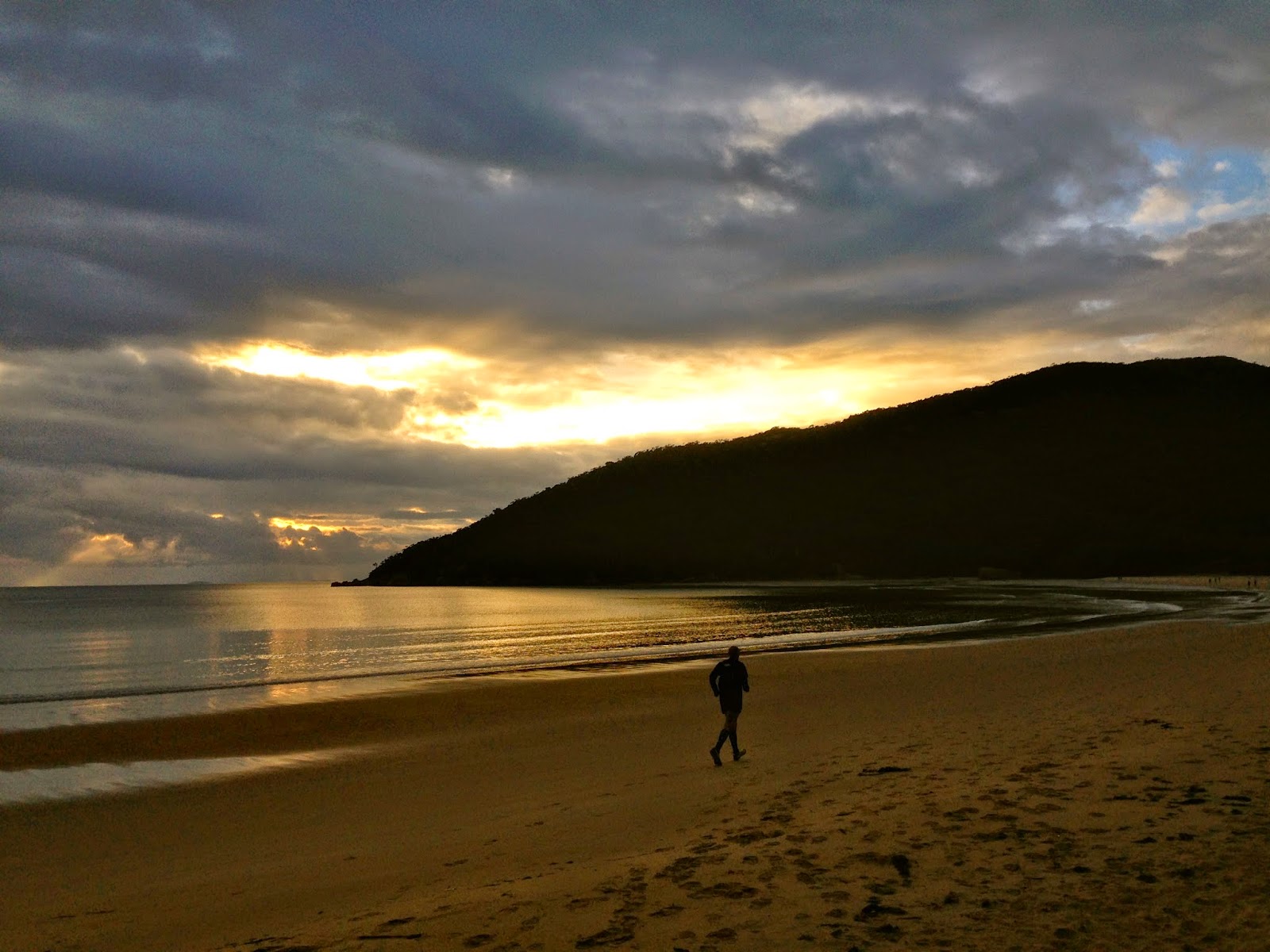 Despite the glorious surroundings, and running, I was feeling pretty crappy. My heart rate was above what it would be ordinarily, and I was clammy rather than sweaty. My hands had gone all puffy and numb, which was weird. Pretty soon I was visiting (to have intimate relations with), various pit toilets, and also at sundry places in between. Overall I would lose an hour spent on loos. And my knee was sore and not entirely stable.

Instead of taking my shoes and socks off to cross Sealers Creek like all the other sensible runners, I tried to jump across some rocks, but slipped, saturating both runners and gashing my hand in a spectacular display of uncoordination. Now I was bleeding, like a wretched wounded beast. Having pain in a different place however was at least distracting from my knee. 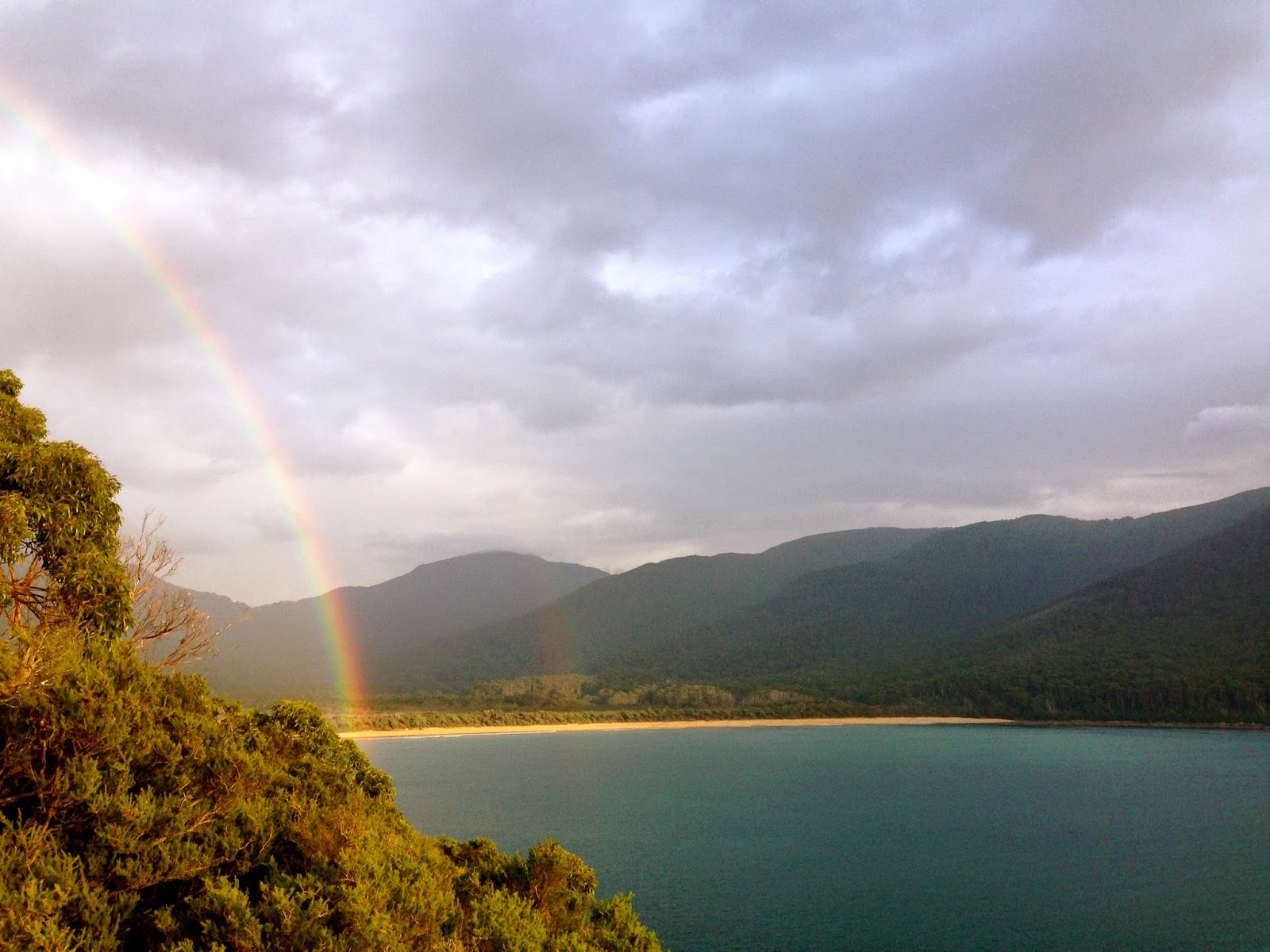 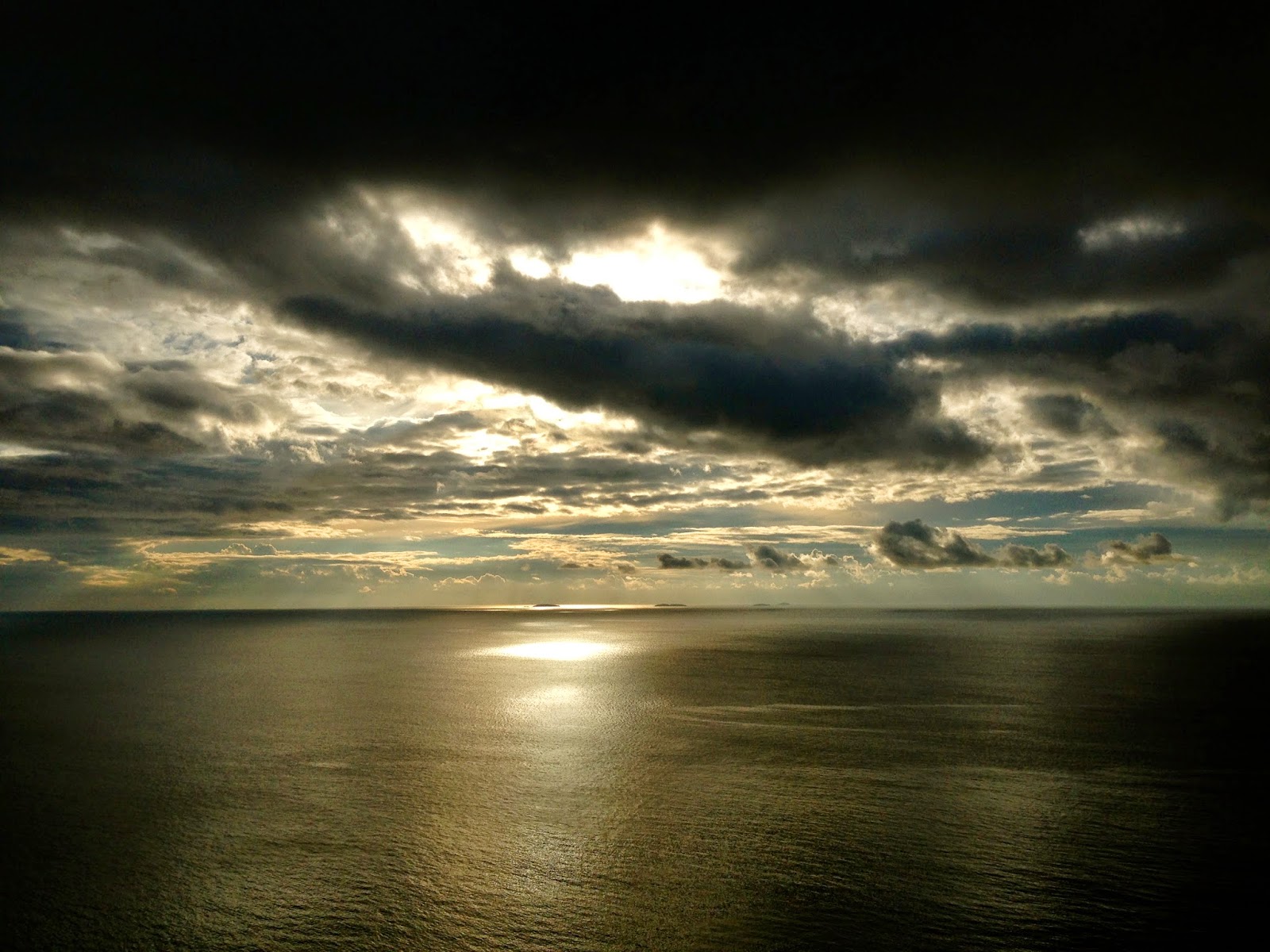 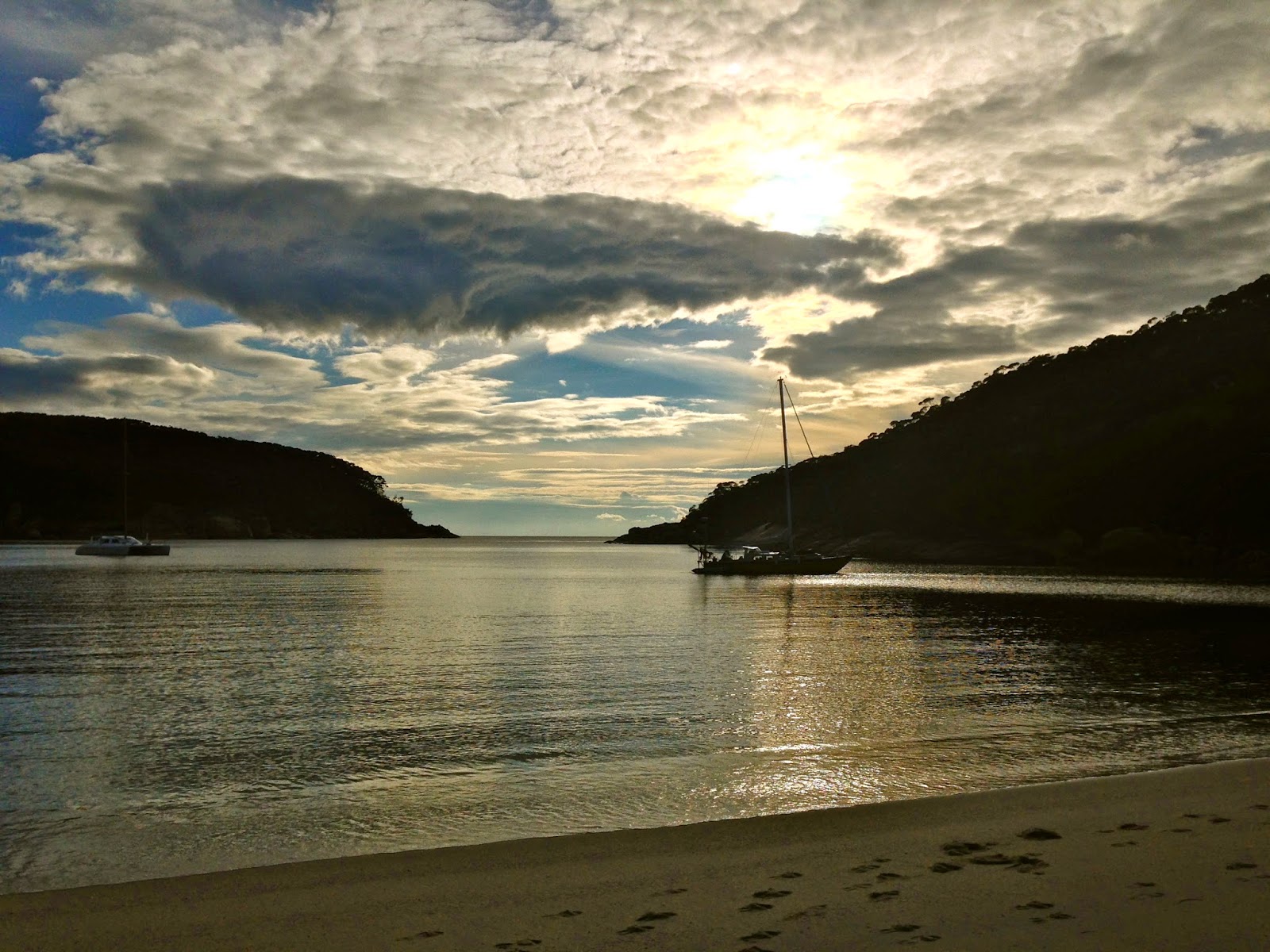 The sun rising over Bass Straight was stunning, with rainbows highlighting a passing storm back at Sealers. It wasn't running so much as sightseeing, and it was fun watching runners ahead pop out onto various granite rocks or stumbling on to splendid pristine beaches and marvel, each progressively more beautiful than the last. Sealers, Refuge, Little Waterloo and then Waterloo itself, the most beautiful beach in Australia, if not the world, the water typically so turquoise and clear that it proved very difficult not to strip off and jump in. 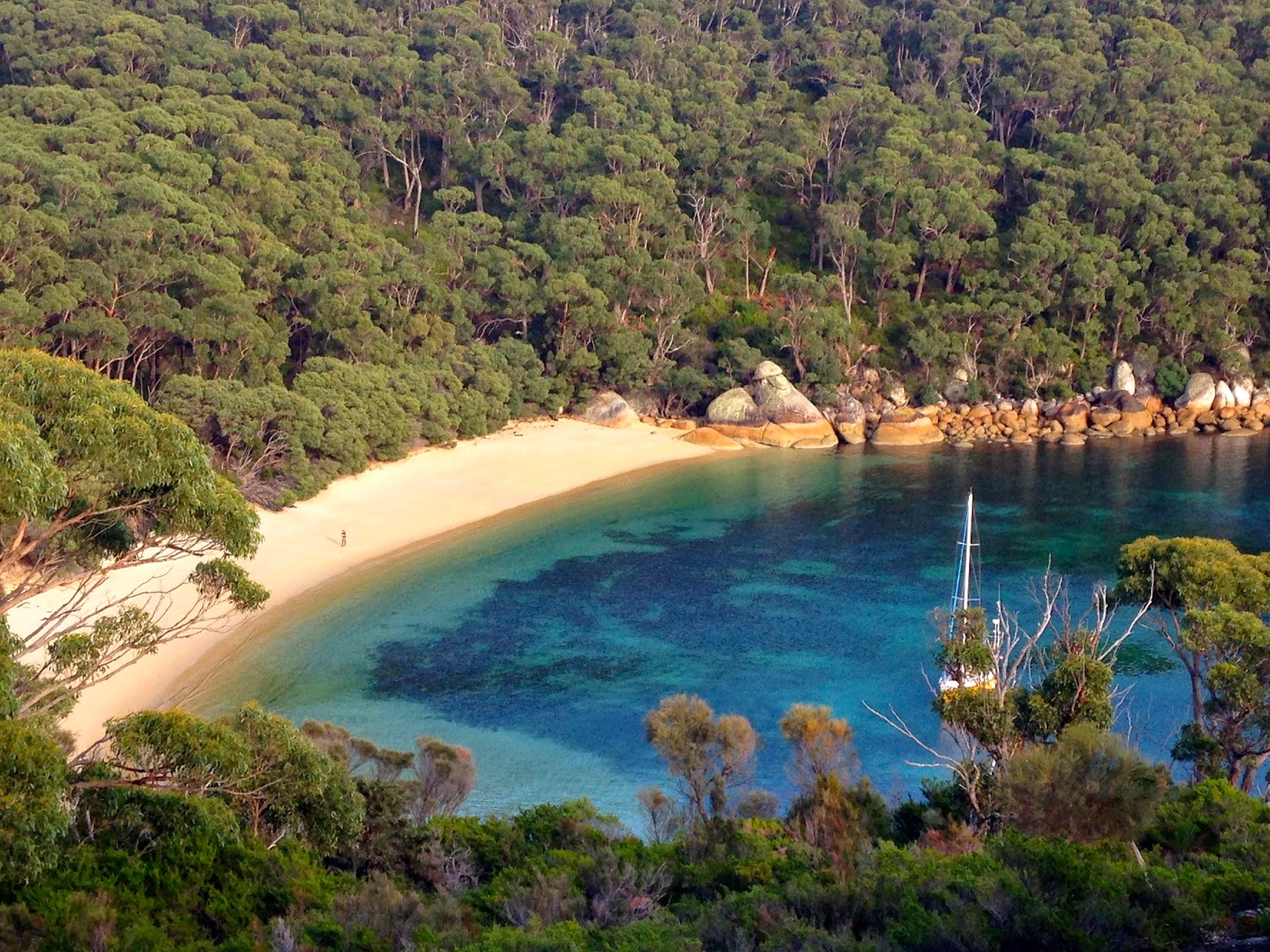 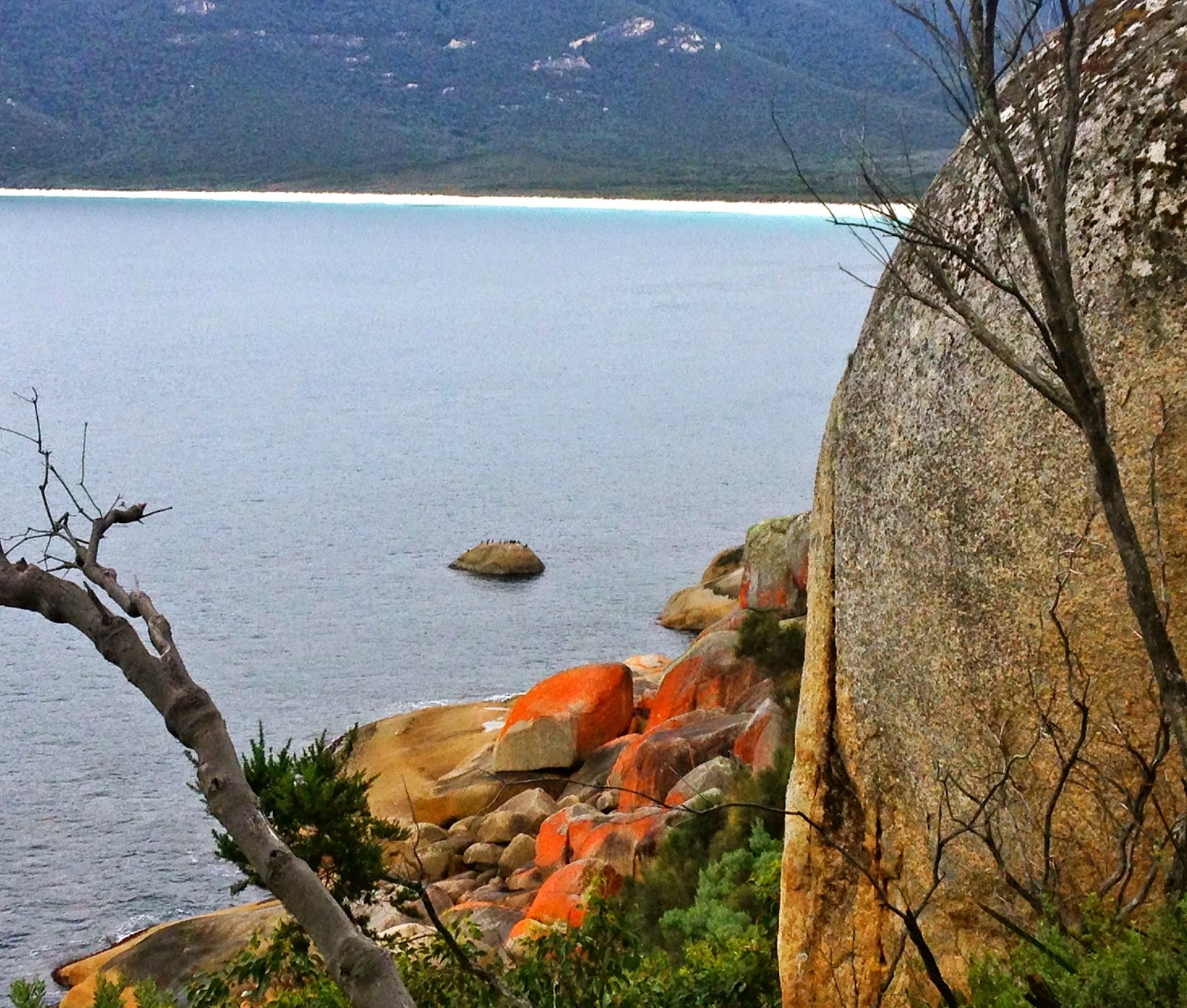 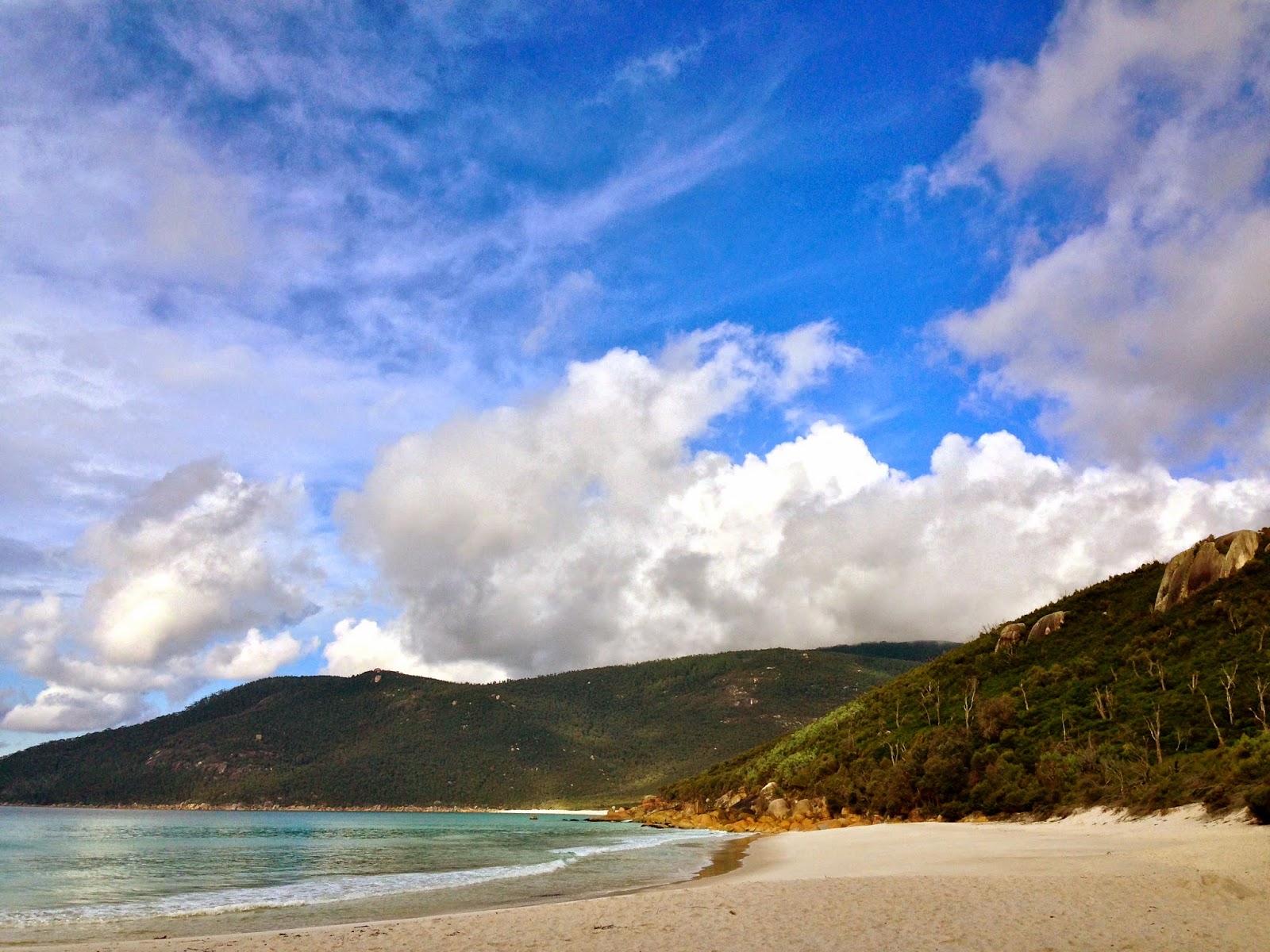 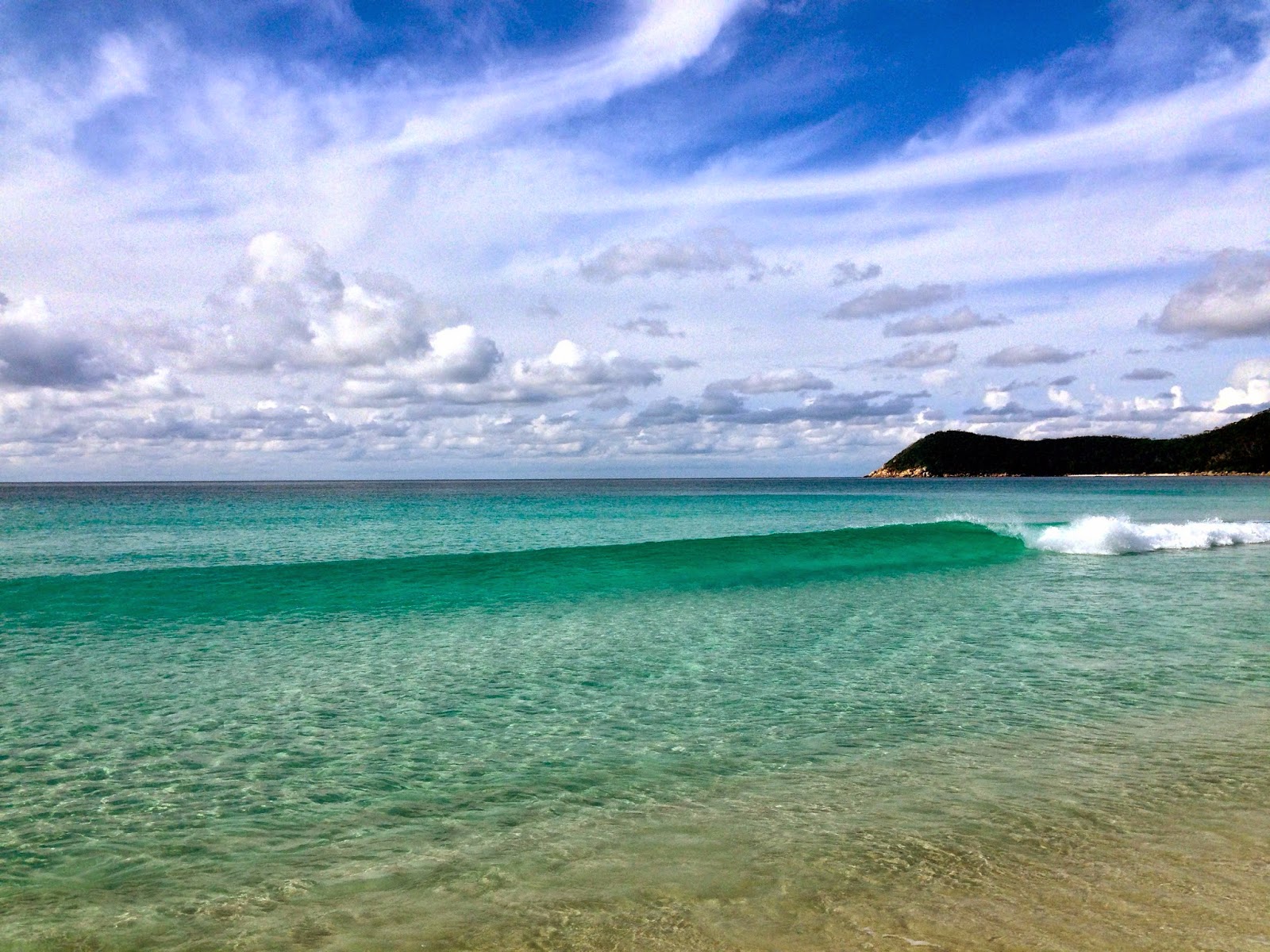 The trail up from Waterloo was interminable and proved a real slog. Somewhere along the ten kilometres to the lighthouse I passed the halfway mark, and knew that I could complete this event. But glimpses of the lighthouse still seemed so far away. 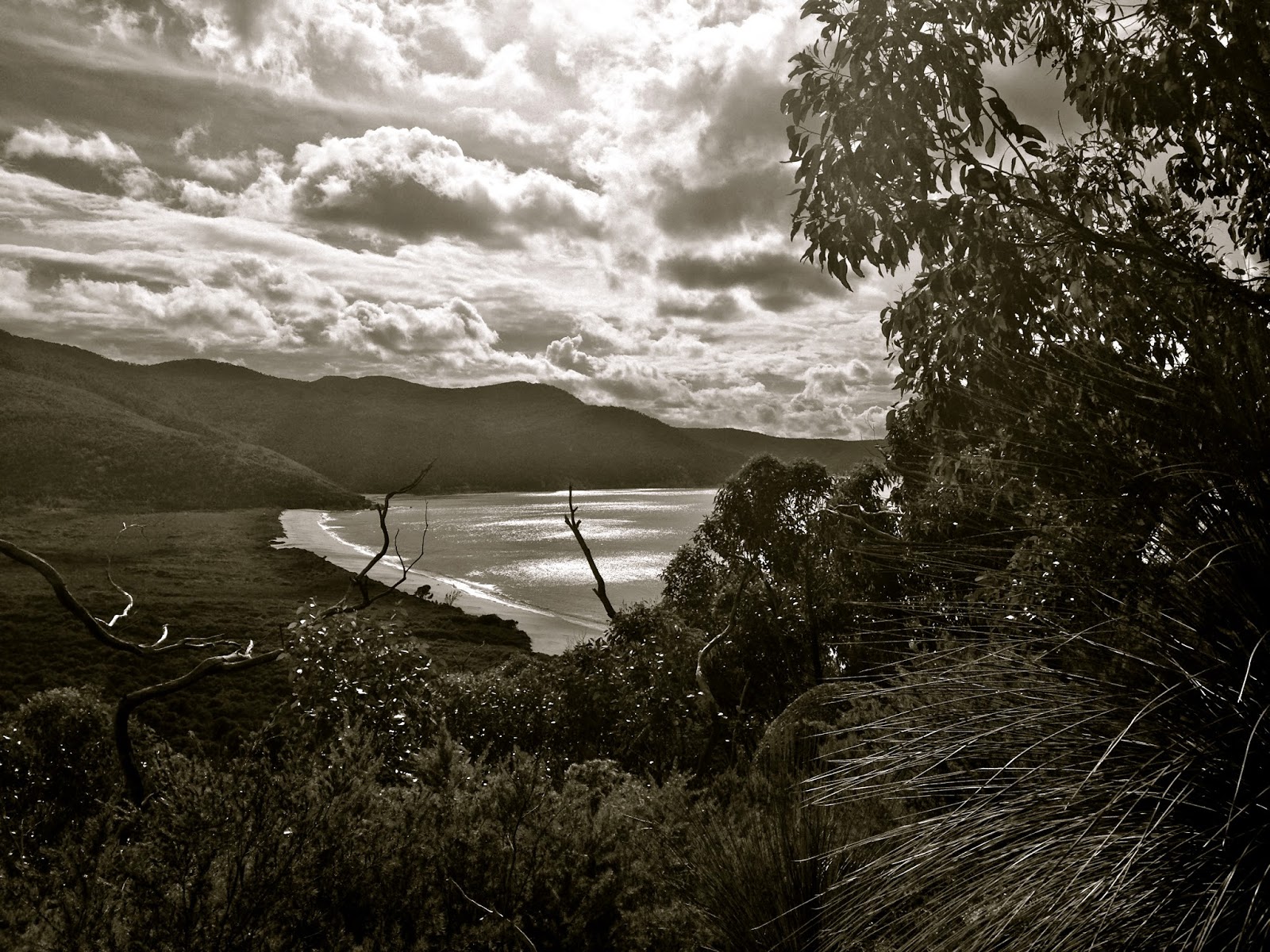 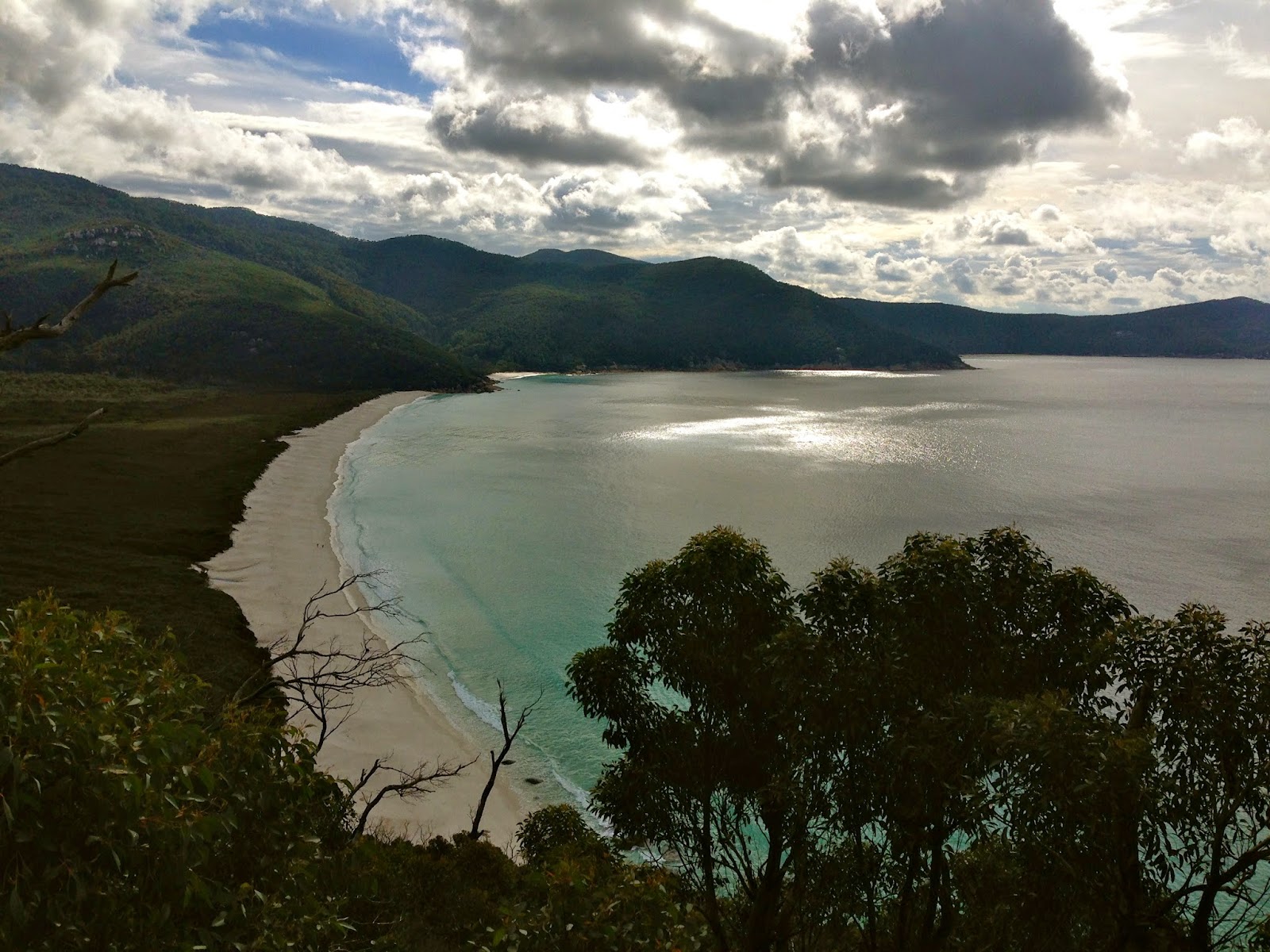 Up until now the weather had been milder, drier and calmer than forecast; perfect running weather really. After passing Tom Brazier shooting past the other way in what was obviously a cracking pace for the hundred kilometre event, I was soon clawing up the concrete ramp to the lighthouse. A southerly fetch was hammering the granite keepers' cottages, and as I started to slink back down, there were a few drops of rain. More worrying though were my legs which were really starting to hurt on the downhill. 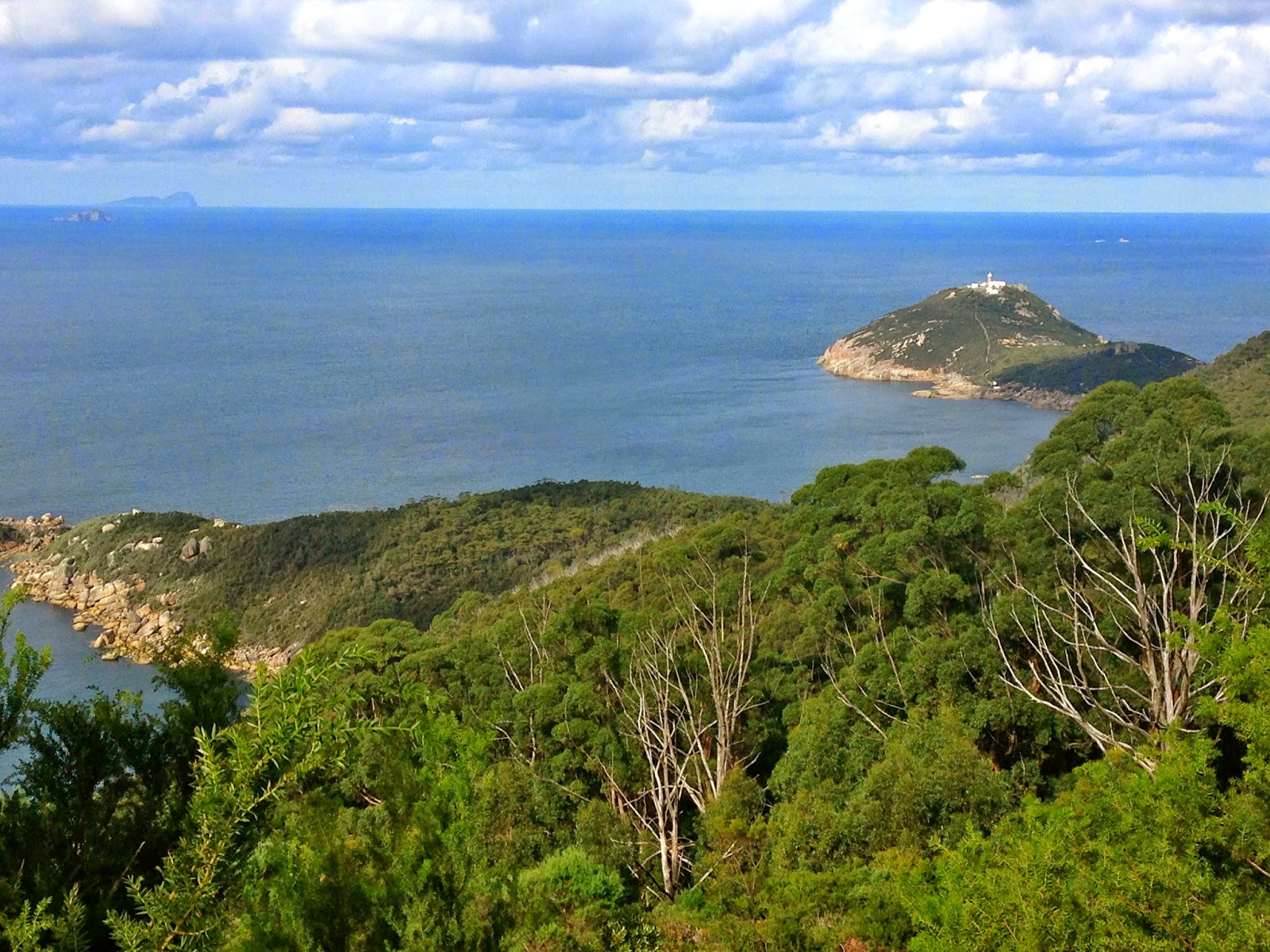 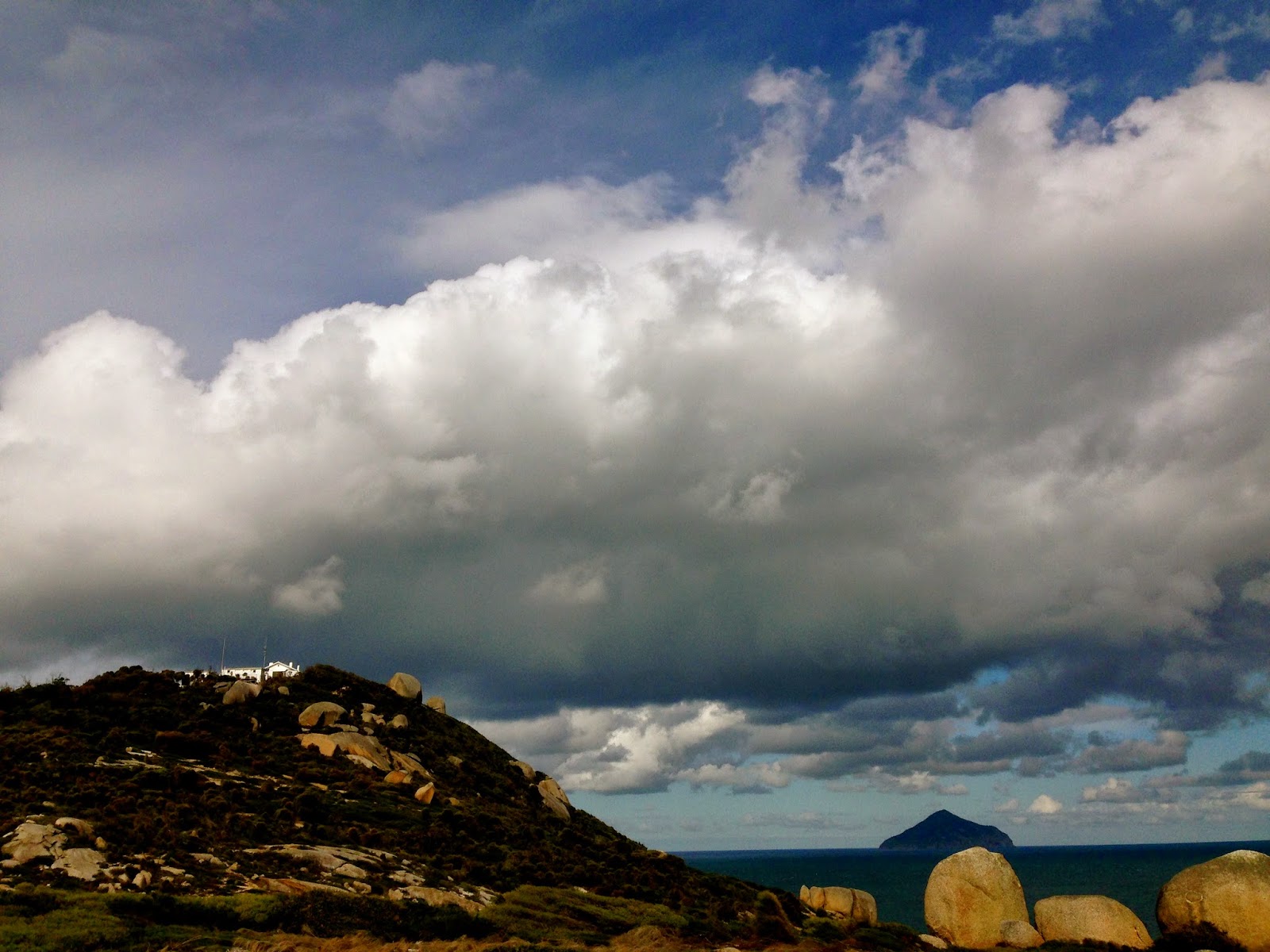 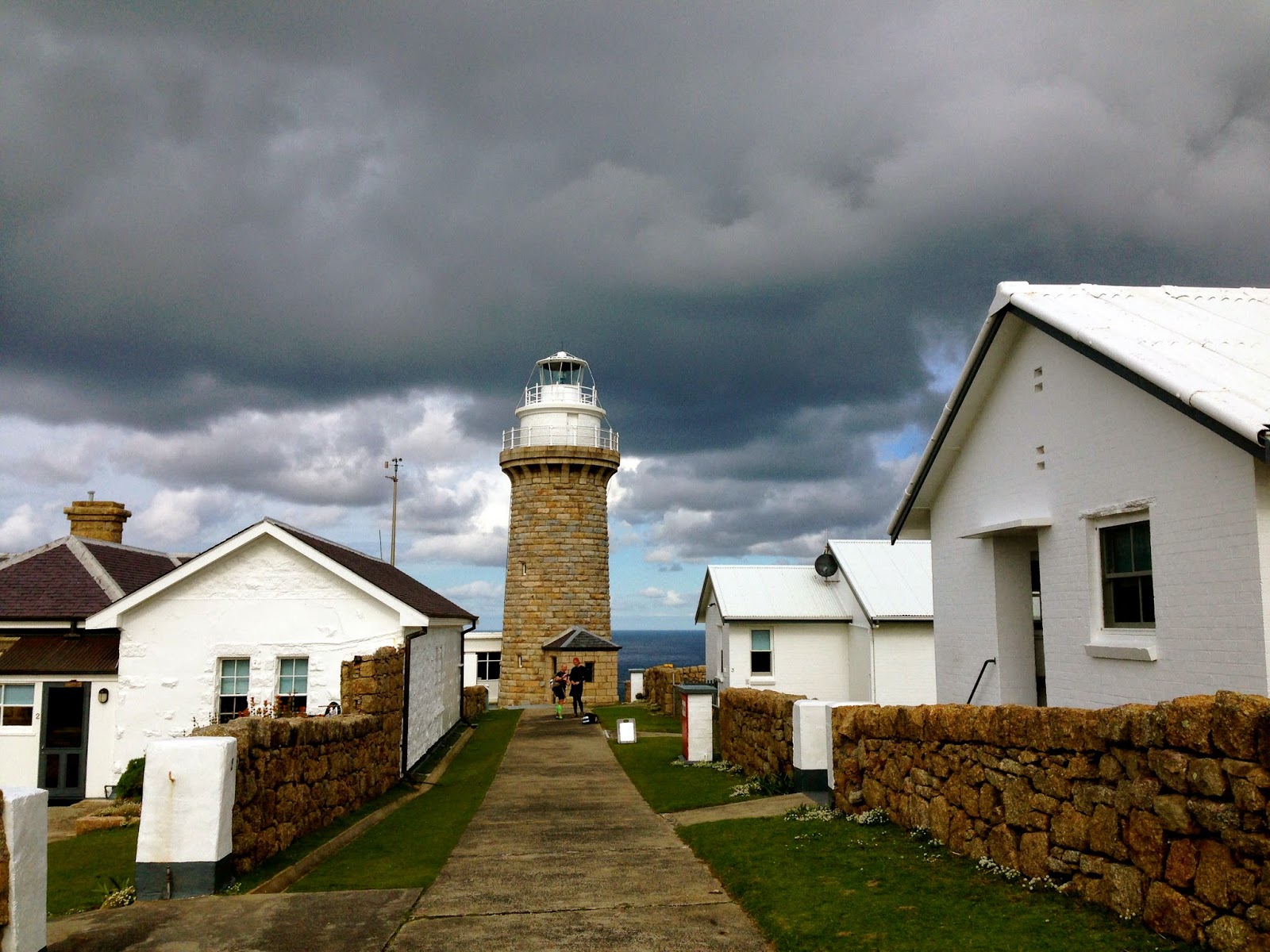 Soon they were hurting on the up as well, and then on the flat. In fact, soon they were hurting in all kinds of new and interesting ways. I learnt that muscle pain is different to joint pain is different to tendon and tendon sheath pain, and that various combinations are a different experience again. Walking backwards was a pain variant of forewords, but there was no technique that I could find which was in any way comfortable. This was where my lack of training had left me short, and it was now a symphony of pain as I finally ambled in to Roaring Meg.

Philosophically, I generally don't like the idea of analgesics during a run. Masking tissue damage seems counter-intuitive, and anti-inflammatories can fry your kidneys. However renal failure was starting to seem like a reasonable trade for some relief from the excruciating cramps and spasms in my quads. It was frustrating, mostly because the rest of me really wanted to run. I wasn't really exhausted, just sore. 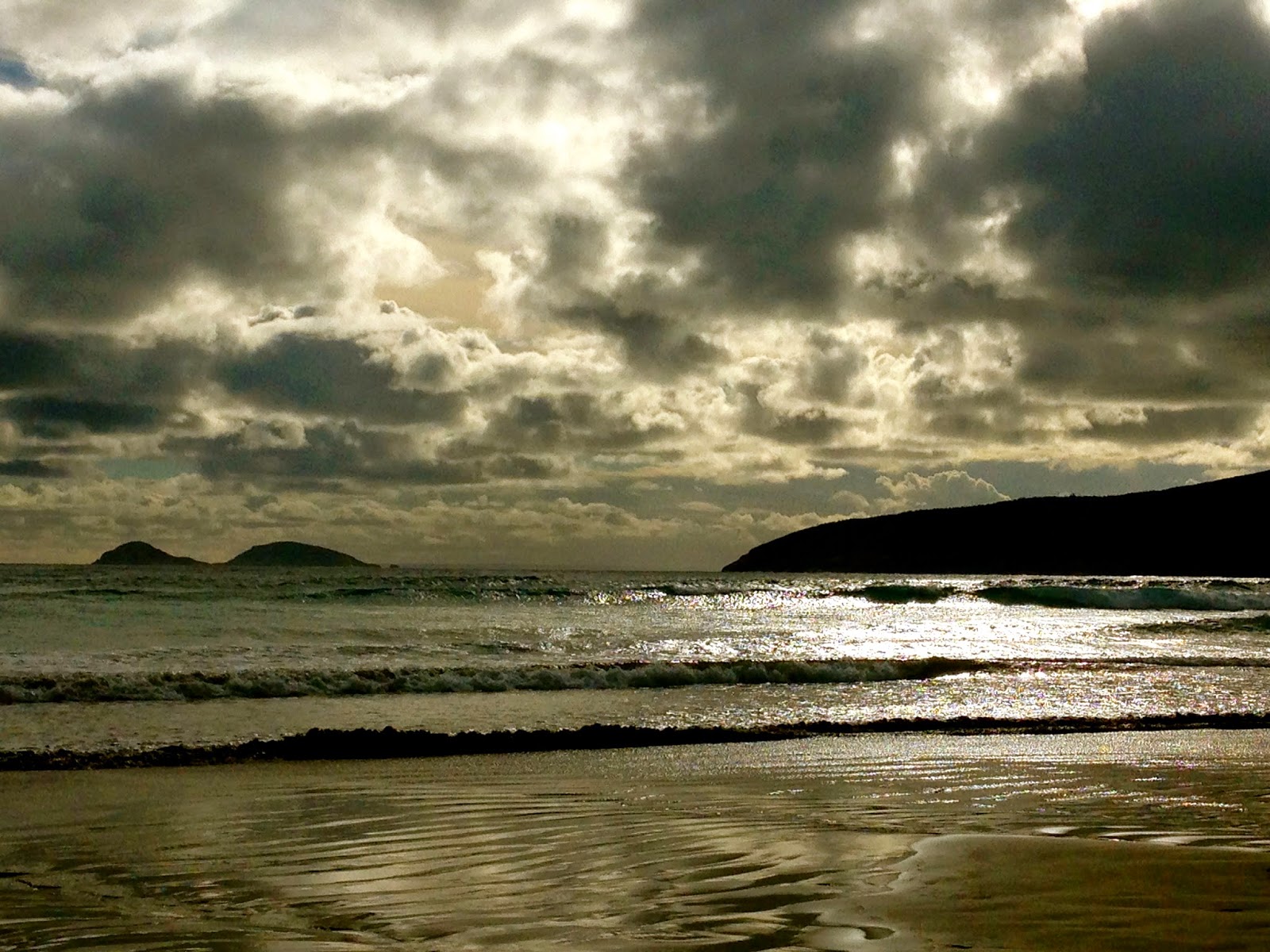 I rang my wife and pushed back our planned rendezvous at the finish line an hour. And then I popped a couple of ibuprofen for the long hill down to Telegraph Saddle. I was on the home stretch now, but could no longer run. To appease my kidneys I drank another litre of water as I felt the pain back off a notch, easing me into a shuffle again. But I still felt like an old cripple, and so popped a couple of panadeine chasers.

As an opioid wave washed in to my bloodstream, I found that I could jog again, and then run. It felt great! I had only been passed by one other runner since the lighthouse, and soon I'd caught up to him, our solitary Kiwi entrant Paul Reidel. He and I ran together for the next fifteen kilometres, chatting for the rest of the race. Oberon Bay was fairly wild with a huge swell and very high tide.

As we rounded the southern point of Norman Bay, an emotional wave heightened my senses. After nearly ten hours of running, the finish line was in sight. There is nothing like physically and mentally pushing oneself on an adventure into the unknown to feel truly alive. Mum and dad were with my wife and kids at the finish line, together with a cold beer and plenty of hugs and kind words.

There had certainly been a few low points in the lead-up and during this race, and although the fun-run was over, the fund-run wasn't. I already know that I'll be back for more ultra marathons in some beautiful places, because this one was so terrifically awesome. But it would be especially fantastic if I could make my pledged target of $10000.00 for The Royal Women's Hospital. 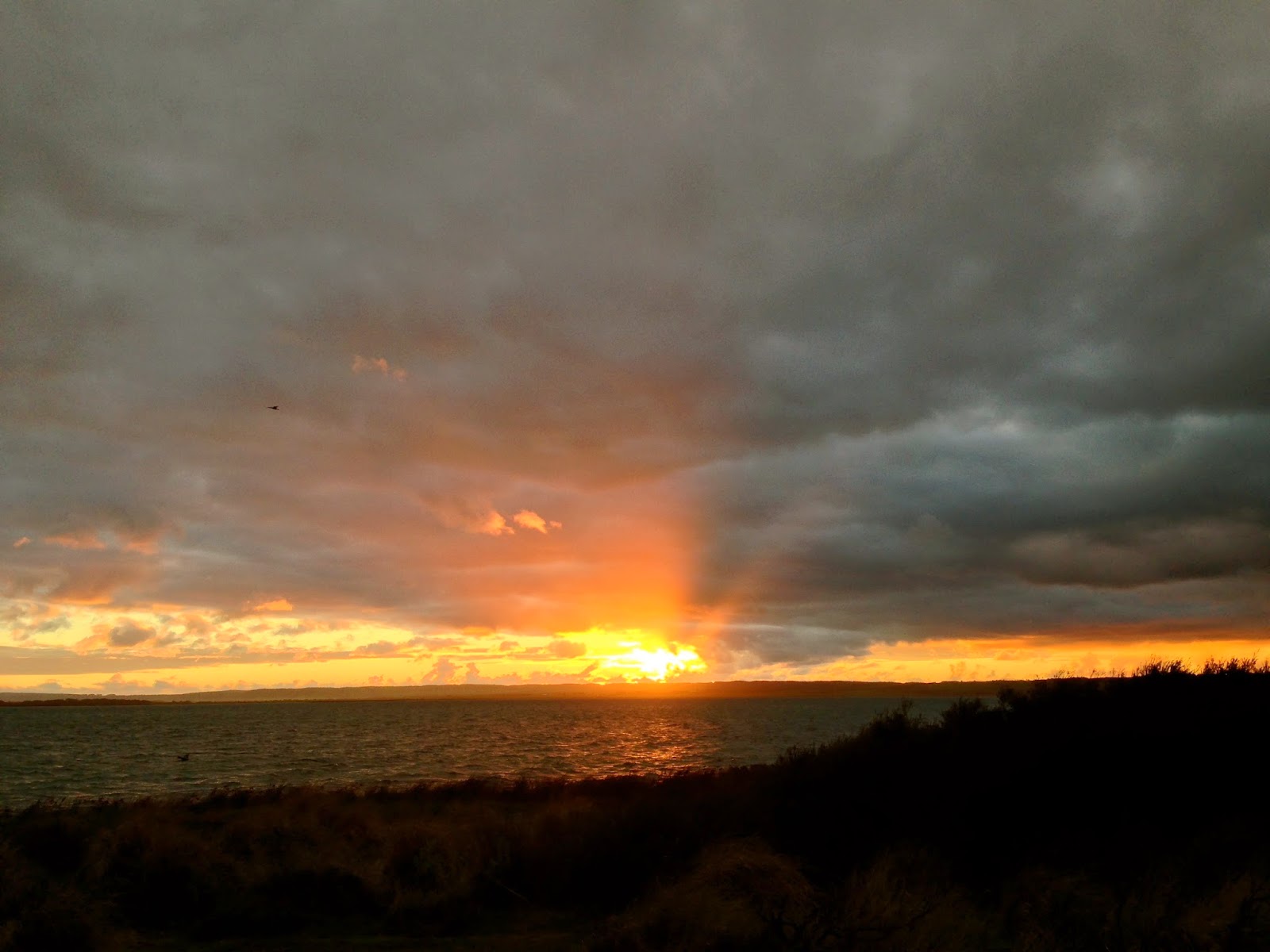