For the last two years, Santa has declined respective requests for a wing-suit and light-suit.

This year however She was at least intrigued by my request for a phoque-suit.
It must have somehow piqued some recidivist notion.
A spandex onesie - a bit like Batman, but maybe more like Robin.
I was excited. 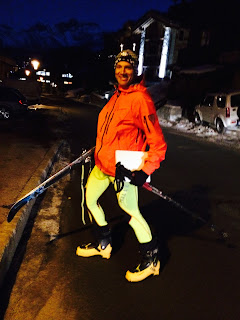 The French are crazy about phoquing. They invented it, and now it seems everyone's doing it.

In the warmest ever French December, it had rapidly become apparent that sticking seal ('phoque') skins to the bases of your skis to climb up a mountain might well be less injurious to one's ski bases: it was either phoquing, or Petex. Indeed, there were a few times where it seemed there were more folks phoquing than riding chairlifts; more climbing up than skiing down.

So I'd been telemarking in the mornings, carving in the afternoons, and then phoquing every evening, which is a beautiful way to end one's day: alone on a mountain watching the sunset on Mont Blanc, cote Italienne...

There are a few things that all these French phoquers have in common. The first is the astonishing rapidly evolving armory of kick-arse equipment, increasingly made of carbon fibre. During this holiday, I've convinced myself that if we continue to use skis and ski-boots as a carbon sink, we can solve global warming. It will be a case of purpose purporting cause, such that skiers (as long as they phoque) will be entitled to carbon credits.

The second thing, which almost goes without saying, is that all we phoquers share a love of the mountains and of the alpine - and the third is a complete absence of body fat.
There are no fat phoquers.

So it is only an unrepentant phoquer who would ever entertain trying to slip in to a phoque-suit.
And, like everything else in the world of phoquing, less is more: the less it weighs, the more you pay.

So I didn't tell Santa how much my phoque-suit would cost - She seemed to be having a good enough time in the Courchevel boutiques anyway without my consternations. Nor did I try it on after having made the same mistake recently in Torquay whilst shopping for wetsuits. You don't want to have to buy something by virtue of not being able to extricate yourself from it in the change rooms. You don't want to have to ask the male sales manager to assist you undressing. 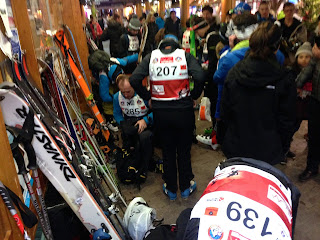 If you live in the mountains, you're more likely to be slim, and will statistically live healthier and longer. There are any number of medical papers on this matter.

Of the ten highest ever recorded VO2-max's, the majority (if we include the nordic disciplines) have been crazy phoquers. The fittest fuckers are mostly phoquers. As an amateur physiologist, my pet theory for this (over and above the effects of altitude on the cardiorespiratory system), is that phoquing involves biomechanics that favour and enhance both tidal volume (the volume of air you can swing by your lung tissues), and cardiac output (the volume of blood a heart can pump in any given time). No other sport (except maybe butterfly) involves the rhythmic raising of arms in time with respiration for power strokes. Arms working overtime to get oxygen and fuel to the legs. Kind of like auto-CPR. 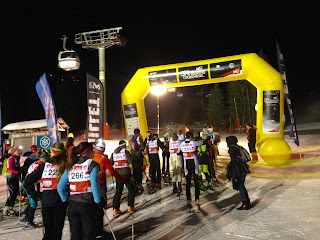 Ski mountaineering (or "skimo") is the fastest growing alpine sport and will be a part of the next winter Olympics. Events are popping up everywhere except Australia, so I was keen to join in the sufferfest, and had signed up for my first skimo race - a relatively modest nocturnal (skimo races can only take place at night or during extreme weather events) climb of 500m over 5km. A modest affair, it is the goal of most phoquers to be able to climb 1000m in under an hour, a feat I'm probably incapable of.

500m vertical is a climb for which most professionals would hardly give a phoque - so imagine my surprise when Matheo Jacquemoud, world champion and star of several of Kilian Jornet's movies turns up to our small event: a bit like Alberto Contador gracing your local velodrome to indulge your ultimate middle aged fantasy. I rush over to him with my children and fawn all over him, and find him quiet, polite and unassuming. He stares at me much like any other professional athlete in his twenties might stare at a middle aged man in a phoque-suit: with something between respect and repulsion.

Just as well Kilian hadn't turned up. I might have lost continence of a sphincter or two, or offered my oldest daughter up for marriage. 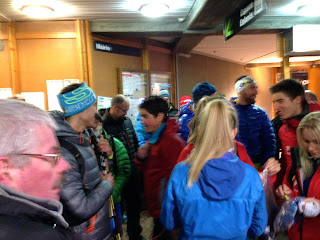 In the prep hall, it's a gear frenzy. As well as checking out other guys (and, yes, OMG, chicks) phoque-suits, I am also checking out the coolest assembly of equipment I've seen since traversing L'Haut Route. I have to restrain myself from picking up other guys skis. Whilst my gear is by no means the heaviest, there are several sets of skis that are threatening to float away and almost need to be tied down. My youngest child accidentally knocks over someone's skis, and the whole row topples over like dominoes. All the cool fit young things turn around and stare at me, in French. 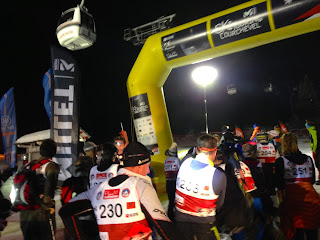 Waiting for my turn to smash the mountain, I am finding my phoque-suit painfully inadequate. It's phoquing freezing, and I mingle close to the pack pressing towards the start gate so that nobody might notice what the cold is doing to my manhood. 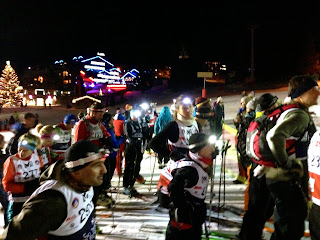 Matheo gets first digs at the course. When he starts running up the hill on his skis, I think to myself, yeah, well, he won't be able to keep that up. Which of course he does. There's another thirty odd starts between Matheo and my introduction to those assembled as 'Michel Jaret de L'Austriche', with the possibility of an Australian obviously a careless misprint. I start out running, and keep it going until nobody can see, then slow down to a more respectable pace that still hurts, and which still has my heart at around 180bpm, where it will stay for almost half an hour. 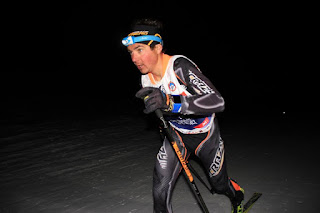 As I pass fellow phoquers one by one, we give each other the customary phoquer greeting, which is a kind of wink that involves minimal movement or expenditure of energy, but which still intones, yeah, well, I could be doing it harder if I was feeling competitive tonight. 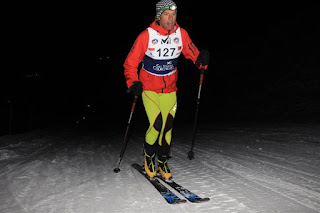 As they turn on the snow canons to blind us, I've passed at least a dozen other phoquers, and I'm starting to think that Matheo can't be too far ahead. There are check points manned by blokes with torches who scream Allez!, Allez! whom I want to stab in the eye with a stock. 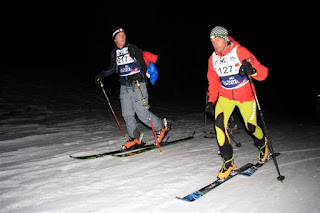 At the summit, I'm surprised by a general lack of activity. My Garmin says just under 28 minutes, and I'm hoping to get back down in under 30.

Most skimo comps I've read of have plenty of up, with usually as much down, and maybe a bit of a rock or ice climb-and/or scramble. The key to a competitive time, over and above fitness is often how quickly any skier can transition from phoquing to a skiing state. Over the prior week I've been rehearsing transitioning without having to take my boots out of the bindings. This involves some rather awkward manoeuvres in which it is certainly possible to pull a hammy or dislocate a hip, or even be rendered impotent; and all the more lurid in lycra. But none of this is evident on the summit.

I seem to be the only phoquer who has mastered this technique. 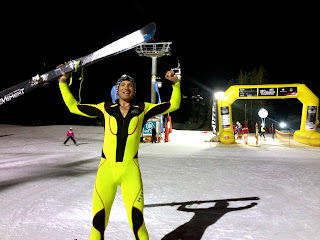 As they fold their skins with French fastidiousness, a few phoquers are staring at me curiously. An evidently annoyed official yells at me to take off my skis and get the phoque out of the way.

Awkwardly, and with a whole lot of phoquing around in spandex (like I am actually the age that I am), I fumble off in my phoque-suit to the side like Mr Bean.
In retrospect, everyone else had known what I hadn't: that the clock had stopped on the summit.

However, still convinced I can gain a masters placing, I launch off into the night.

Although they're not high performance skis, mine perform as well as any others on sheet ice as I straight-line it down the mountain, past at least a hundred phoquers phoquing up. As I sweep through the bottom gates, I'm convinced I've achieved a podium position. There's only one other phoquer changing down and hoeing into the cheese vin chaud and saucisson they've set out for us. 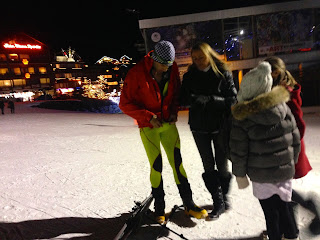 In hindsight, Matheo (and at least a dozen others) had possibly used the first 500m climb as a training run, each of them beating their unfathomable records, and then continuing up higher: up into the real mountains in the depths of night, unsupervised - higher, where there was a better potential to expend impossible amounts of unharnessable energy - or at least a modest chance of dying.

It turns out I've not even been competitive with the local masters. 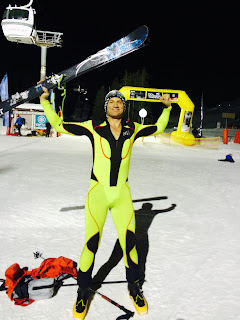 But least my support crew and sherpas are proud of their daddy. 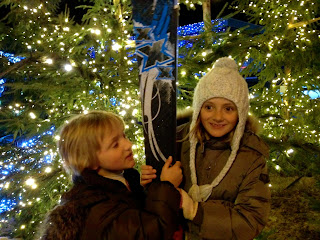 And the raclette and beer back at the chalet still tastes as good as ever. 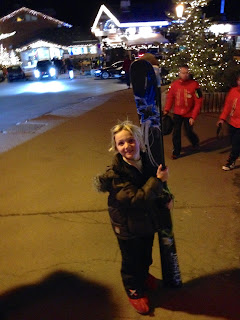