I can still remember very clearly, my first fish.
I was the same age as Balti, so we must have just moved back to Geelong from Gove.
Dad and I were on the pier at Apollo Bay, and it must have been winter as I can remember it being cool, with that western Surf Coast winter gloom.
That excitement of something yanking at your line - something alive and pulsing, almost as strong as your own small arms - something that was life itself. Of dad taking my small first fishing rod (which must have been my 5th birthday present), and realing to the surface a fantastic thrashing silver apparition darting this way and that, but increasingly constrained by our line - and then splashing out into our world and onto the wharf where it continued to flip and dance.
After an hour, I'd wrestled six gleaming fish from the ocean, whilst dad hadn't had a single bite.
Perhaps the best lesson back then (over and above the blood and violence) was of the random nature of fishing: of two fishermen sitting next to each other using identical techniques as set out by the older, with one catching half a dozen and the other zip. But also of the fabulous beauty of fish.
We had a great weekend at DP the weekend just gone, with plenty of painting and work achieved, but also some nice walks, rides and meals.
On Saturday we went for a picnic down by the Victoria River. Being the middle of the day, and with hoppers and food aplenty, I hadn't expected to catch anything.
However on the way back I nabbed a small browny - and then another.
Whilst Balti's technique was trending somewhat random, soon he too had a trout on the line, flipping it onto the alpine grass with a scream. We removed the hook, and threw him back - but it wasn't long before Balti called me over again, because his line was "stuck"...
"No mate, that's a fish on the end of your line!"
He could hardly believe it, and wouldn't stop talking about it for the rest of the week.
On the way back to the car we finally nabbed one big enough for the pan, and I gave the kids a lesson on how to pan fry a fresh trout with herbs.
Delicious! 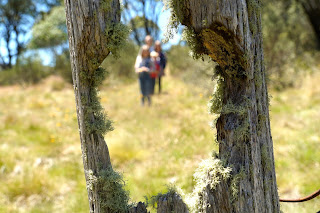 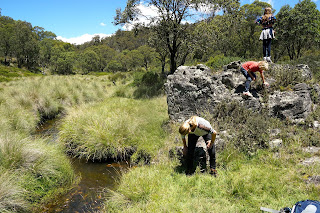 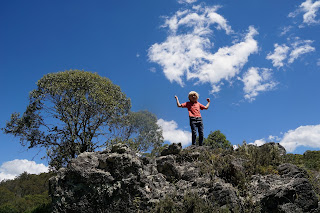 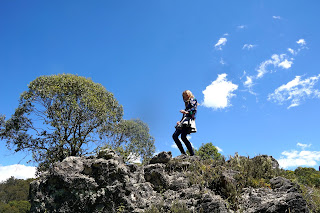 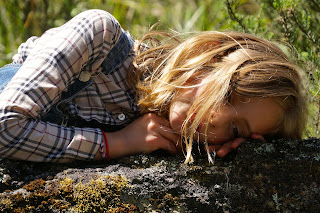 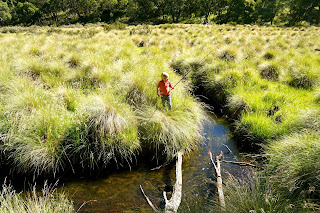 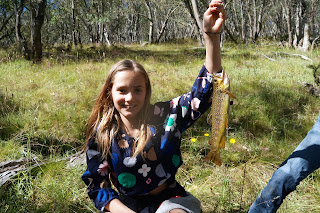 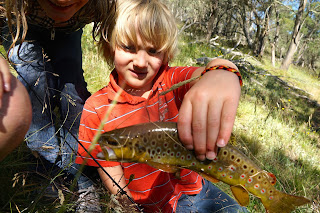 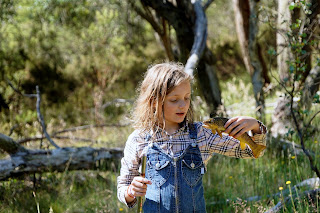 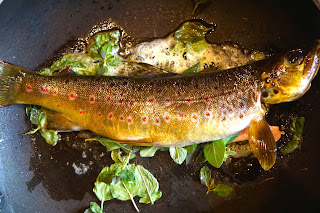