I took my new titanium bits for a bit of a stroll on Saturday.
A Feathertop day-trip would've been nice, but I needed to be within cooee of the kids. At 4, Balti is turning in to a pocket-rocket, but things can go wrong, and even though I had friends out that way, the Razorback was no place to be.
The girls' ballet concert in St Kilda finished late on Friday night, so we didn't get up the hill until 3 a.m. But after a sleep in, and jettisoning the wombats, I was at the Loch car park by 10 and had skied out to Golden Point by 11. The day was splendid, and there was not a soul about.

I skied a couple of lovely lines in the gentle terrain east of Golden Point once past Derricks Hut where the snow had corned up beautifully. I then skied over to the Workshop Chutes but was discouraged by the first, which was still icy and a little mangled by the previous weeks's rain event. 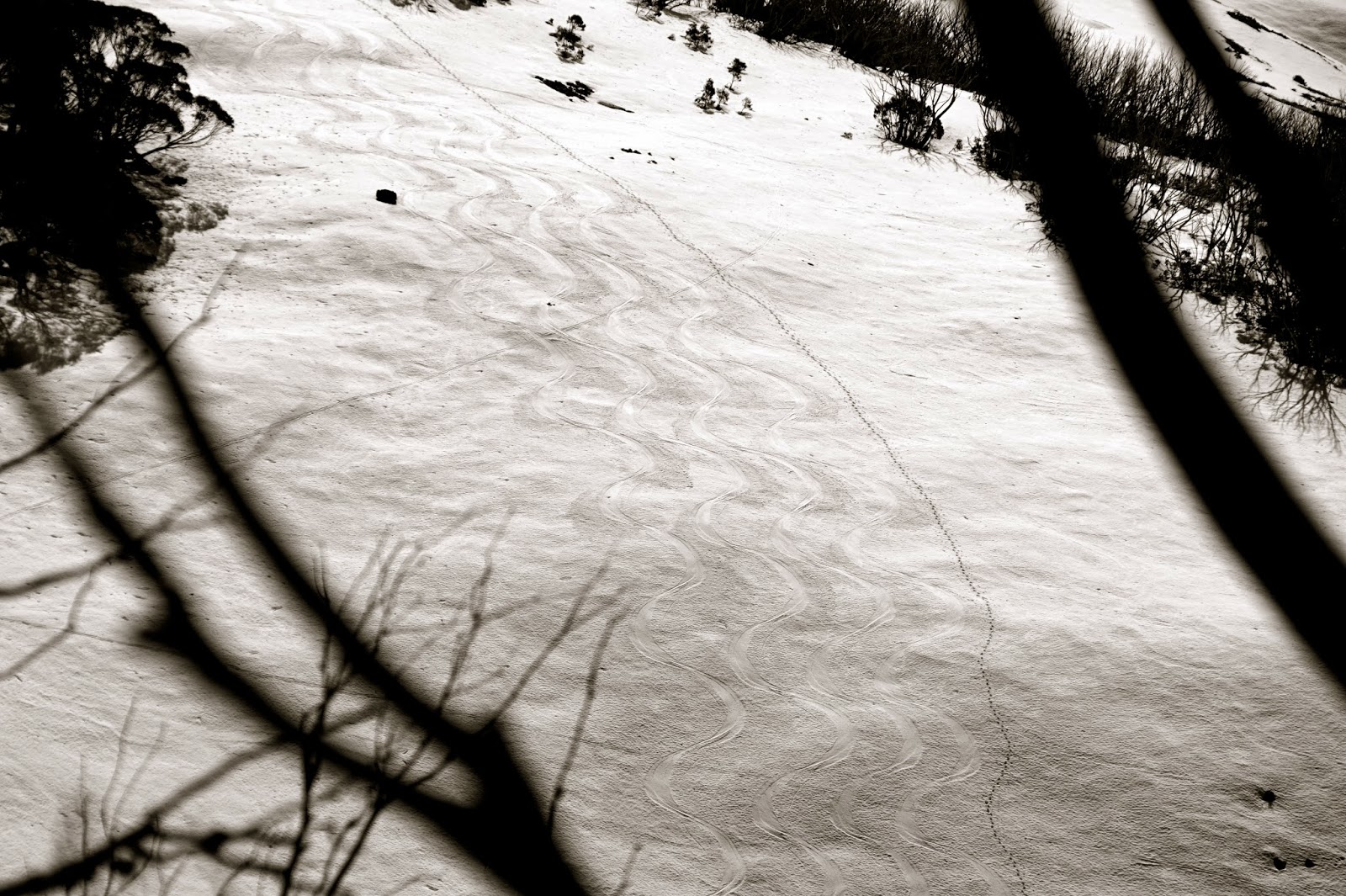 From Derrick's though, I'd spied a face that still had good cover, with a nice pitch and aspect. Plus, I'd never skied it before. I headed back over and had a glorious run down through perfect corn.

It was a classical Victorian Alps line: easy rolling terrain lending into steep and then steeper, and then a gnarly near-vertical chute culminating in a dangerous terrain trap and waterfall. I rejoiced in every second of it. Although I'd packed some kicker-skins, the pattern bases just got me back up the first time, slipping in the steep sunny mush and sliding in the steep icy shadows. On the second line I skied all the way down to the river for some scroggin and drink, and then boot-packed it up for a third and then a fourth. 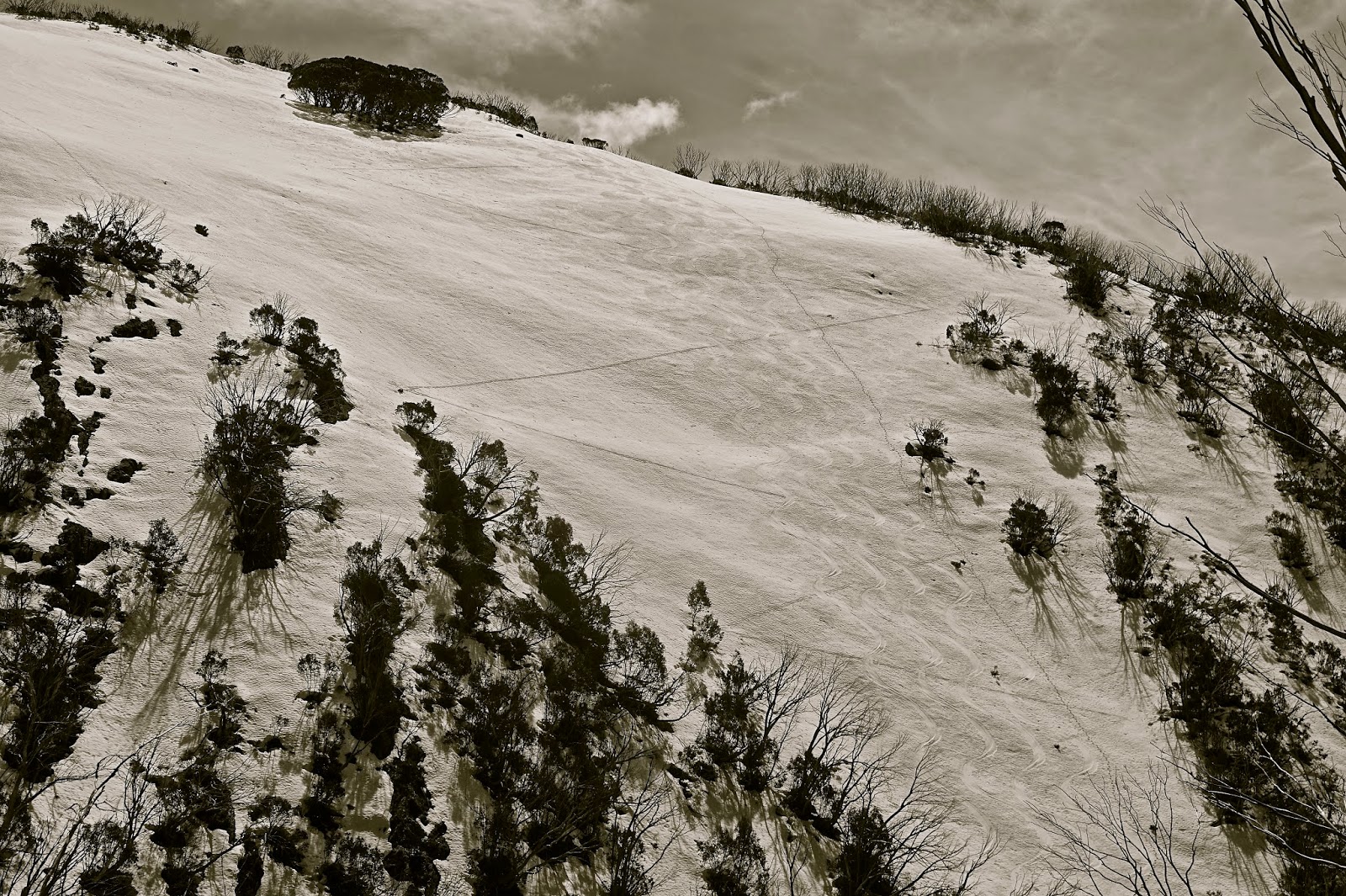 The waterfall at the bottom had a spa that was very inviting. Although I hadn't intended to go swimming, after the last line I decided to cross the river and bush-bash up the other side of Swindler's Spur to get back to the Workshop Chutes. Throwing my first ski over the river, I was dismayed to watch it hit a rock, and then spring with a double flip (and perfect pike) back into the river, where it was immediately and violently swept away in the torrent. 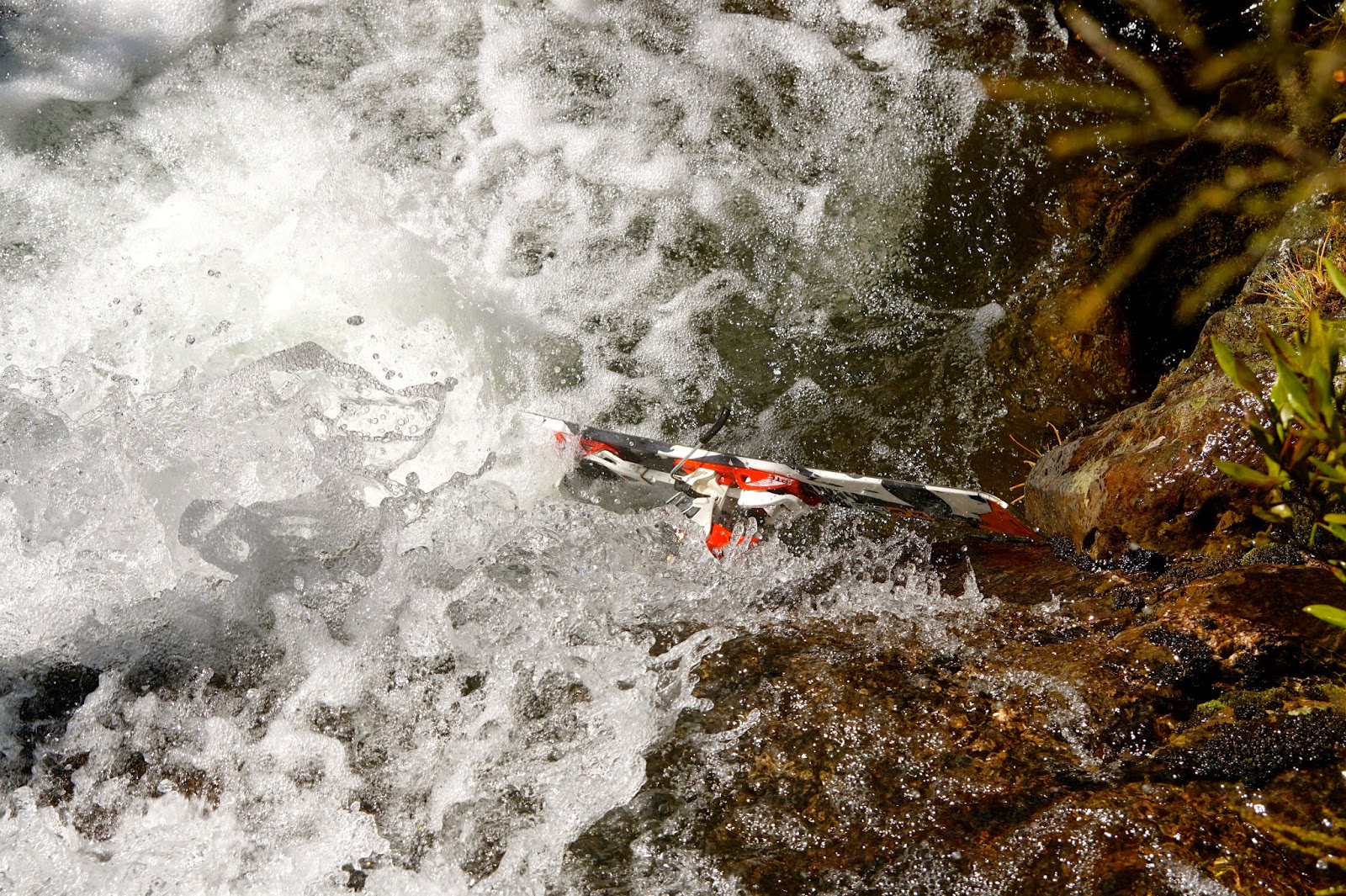 After a bit of bush-bashing and rock hopping, I managed to snare the ski with my stock straps. This was obviously why telescopic poles were invented. 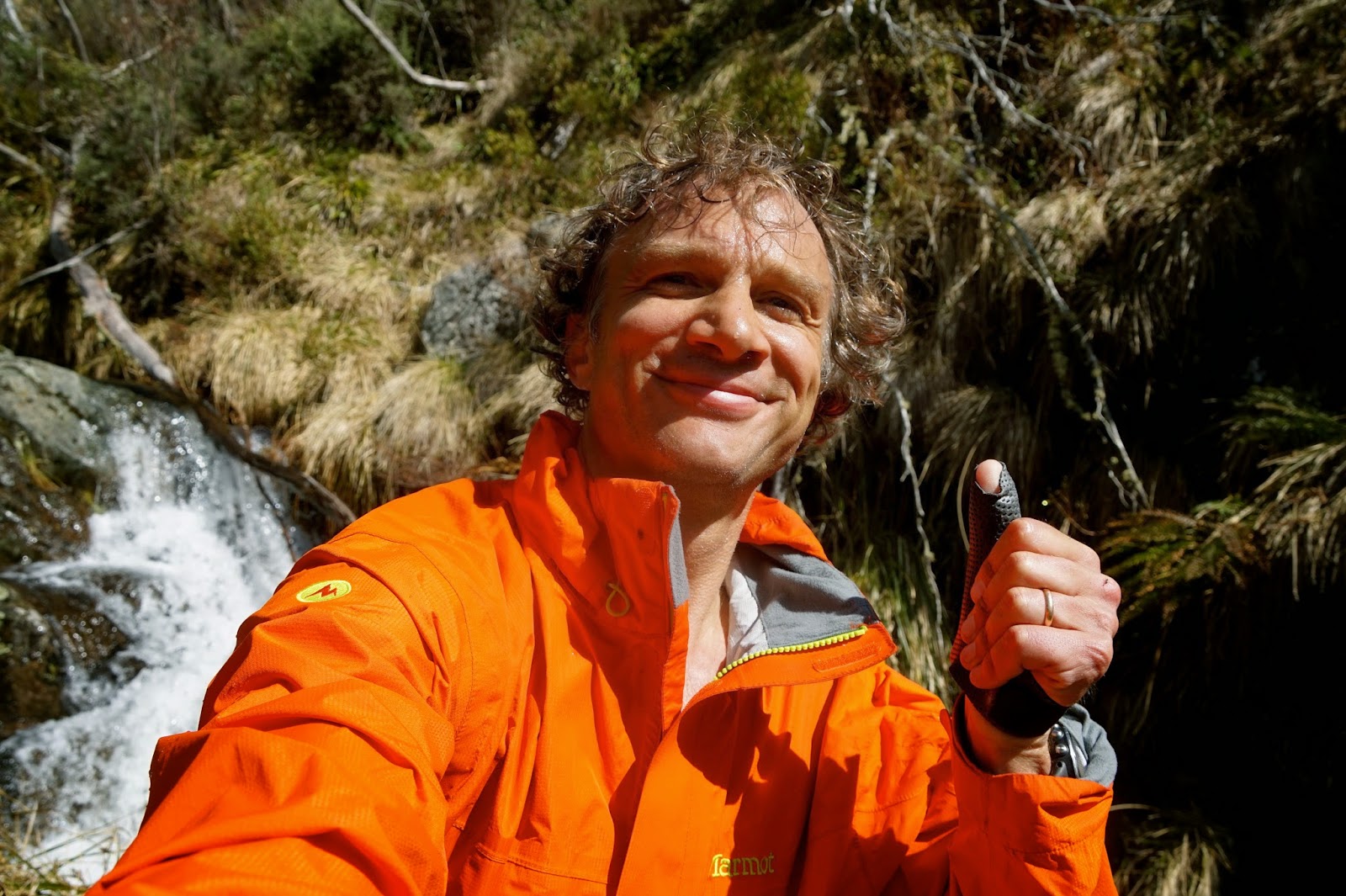 I was feeling pretty relieved, and kicked back in the sun for a bit for a brief snooze but was soon woken by a particularly nasty species of ant that can rapidly swarm invade and bite. Everywhere. 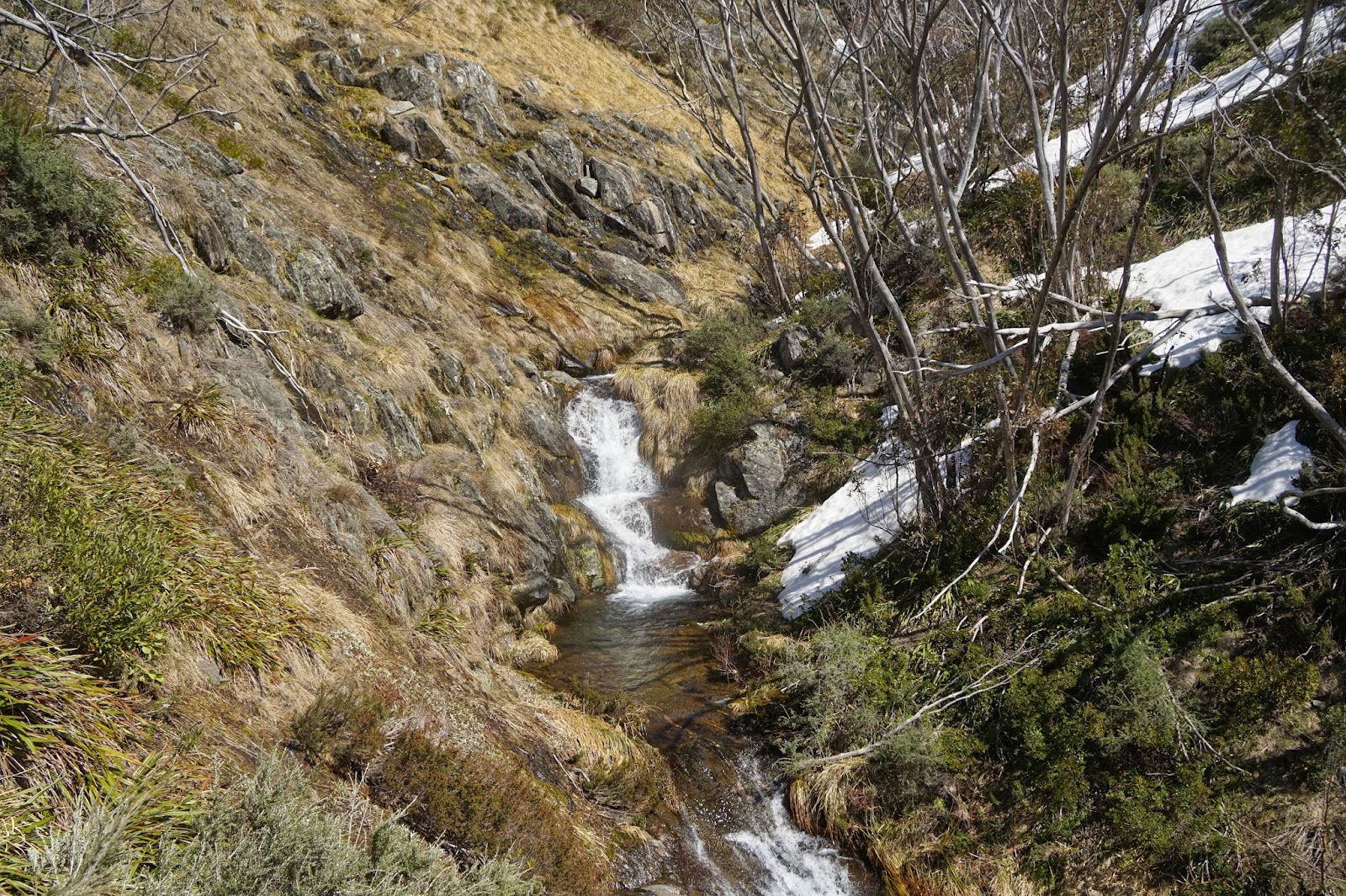 With the sun beating down, and ants down my jocks, I pretty much nuded up to wash off the bugs, and then climbed Swindlers. I was glad there was nobody about. 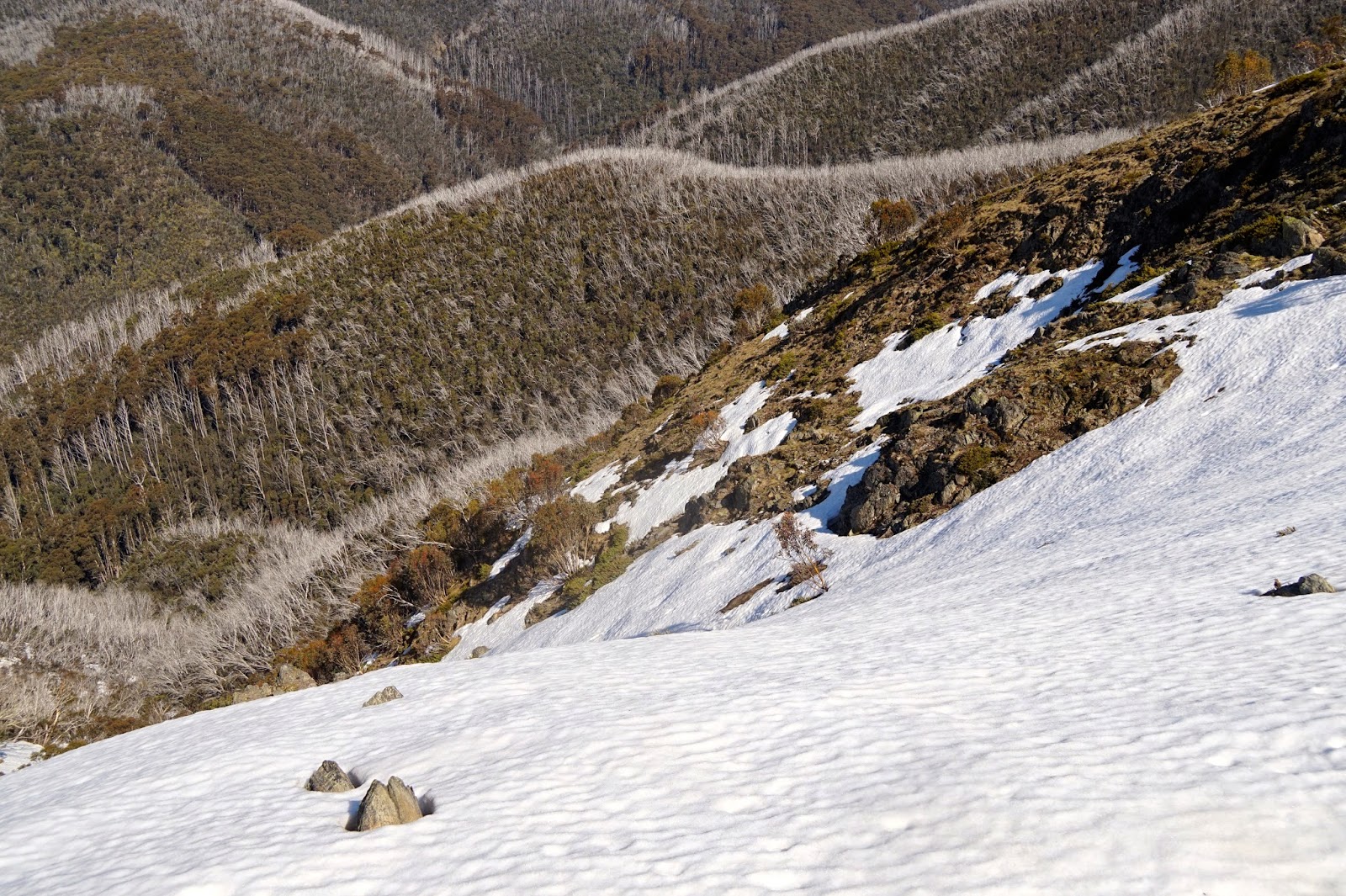 For the next few hours I workshopped the Workshops. The middle chute proved the Goldilocks, with a half-pipe down the bottom curving east and plunging down almost to mountain ash altitude. 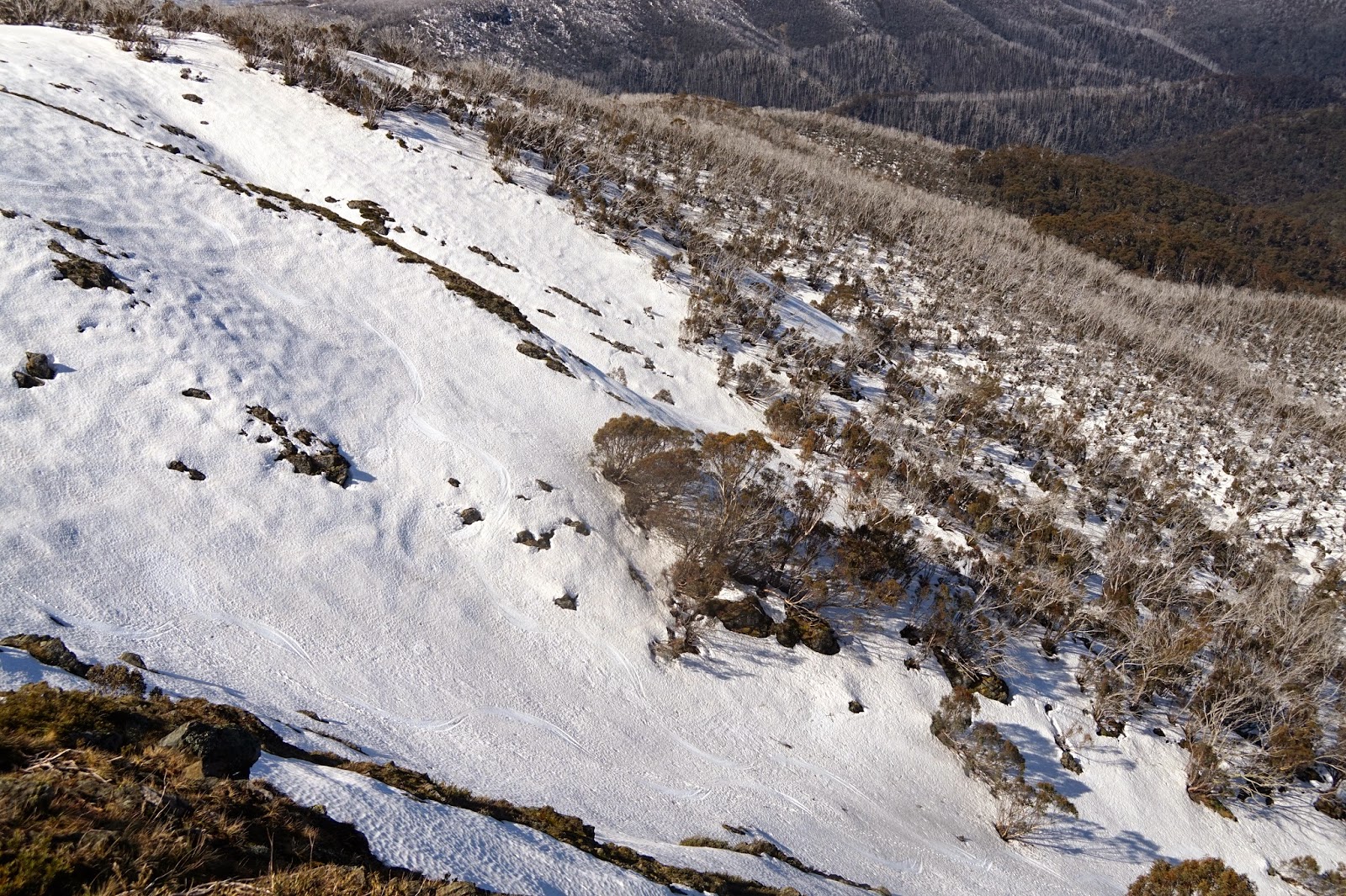 Had a couple down Goldilocks. 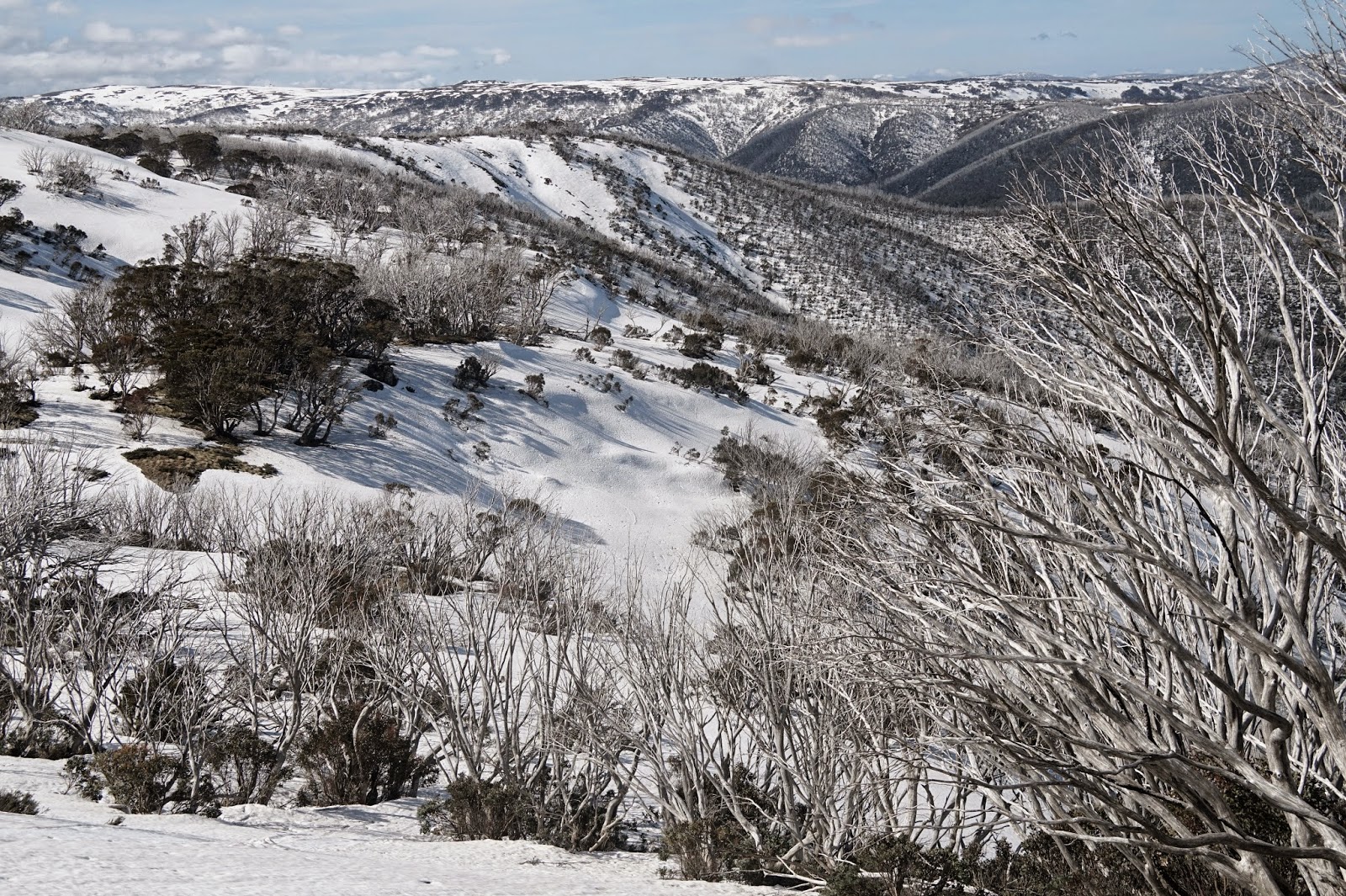 Looking back to the Workshops from the hill above Spargo's. 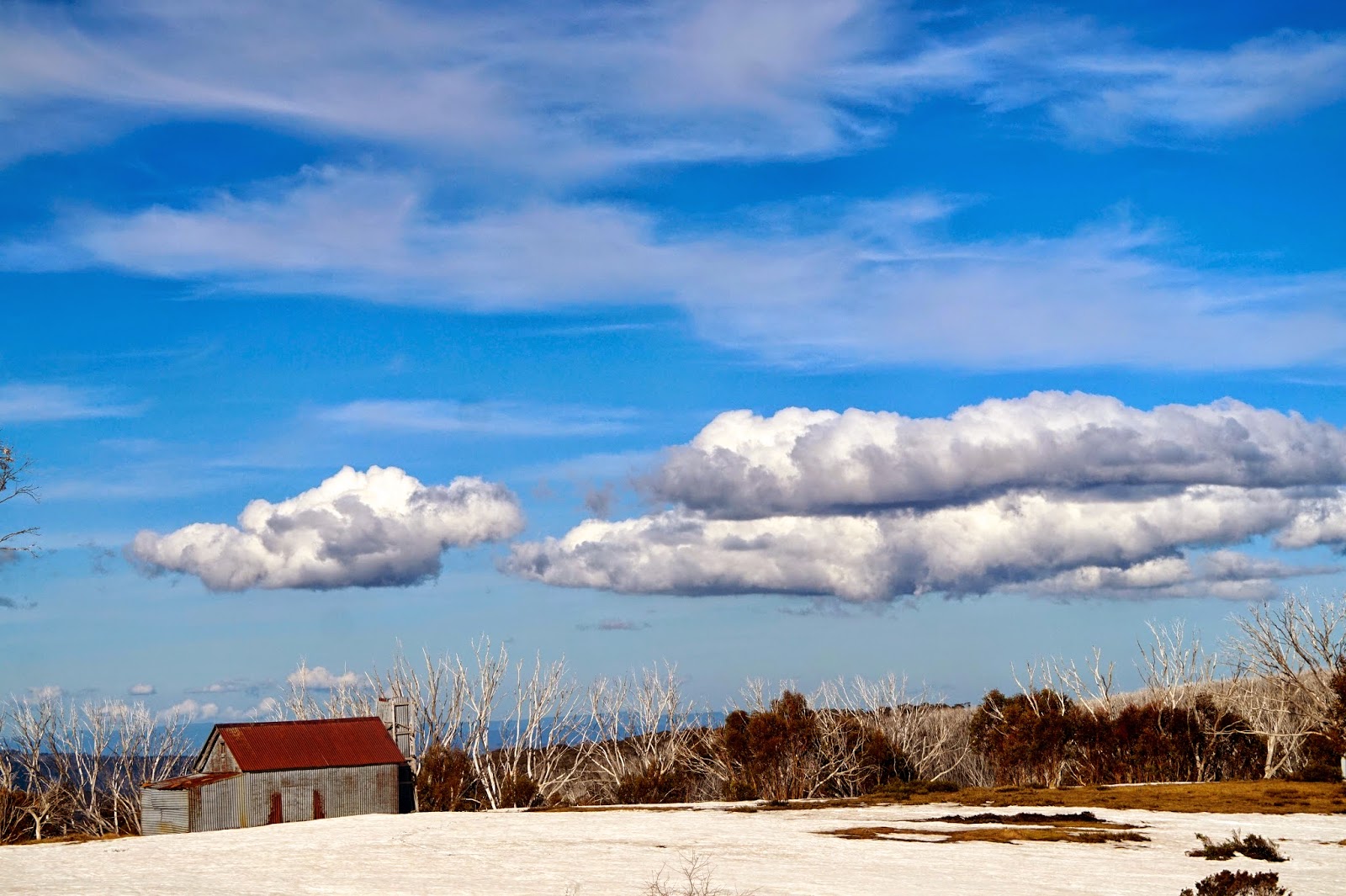 Later in the arvo I skied south, back past Derrick's and up to the hill above Spargo's. I got a nice line down the bowl that most of the club lodges in Davenport look over to, and then dropped in to Spargo's Chute, which I skied most of the way down, and which was pretty sweet. 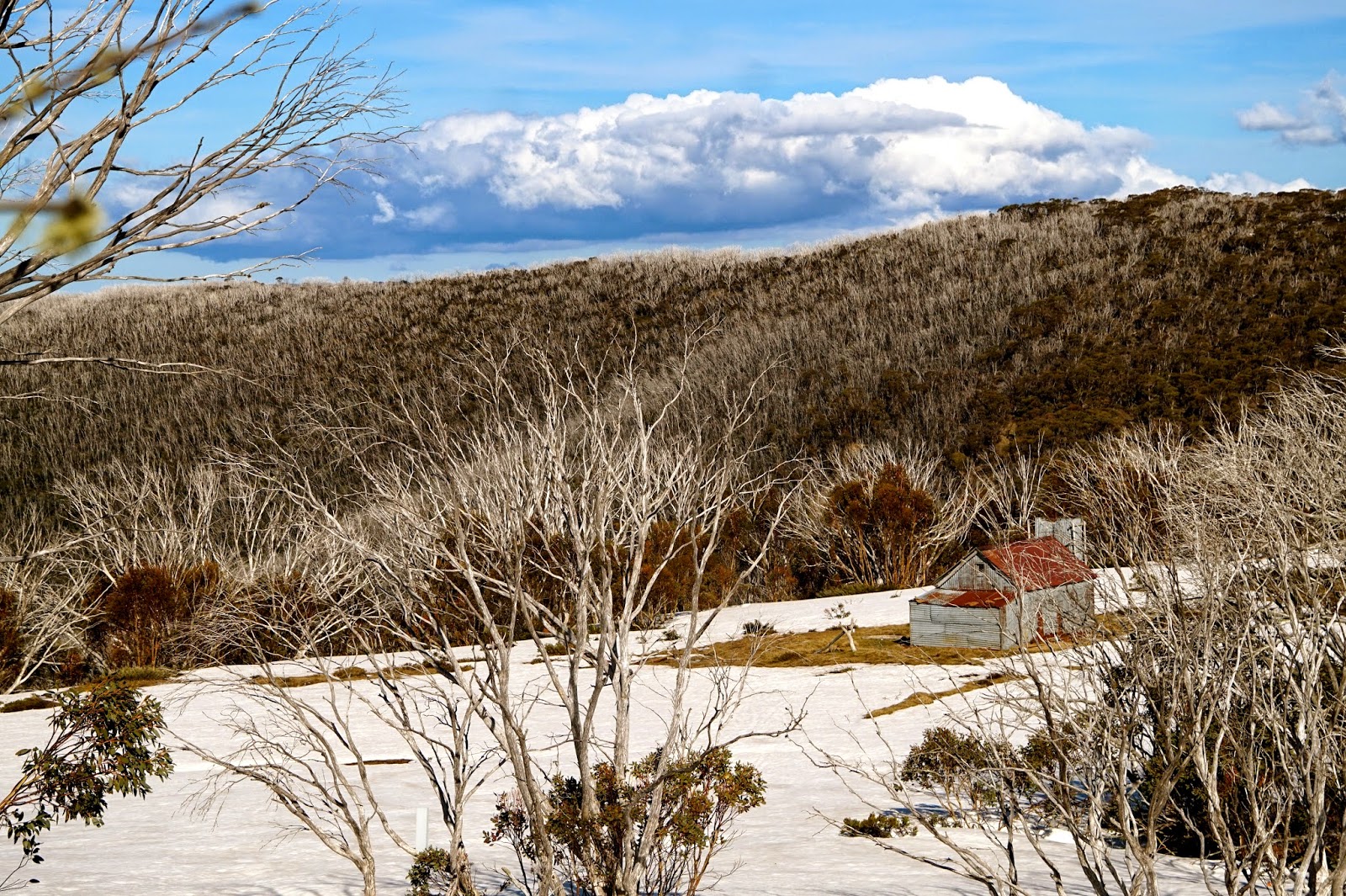 I thought about crossing the bridge at the bottom, climbing up to the road along the walking track and catching the bus back to my car... 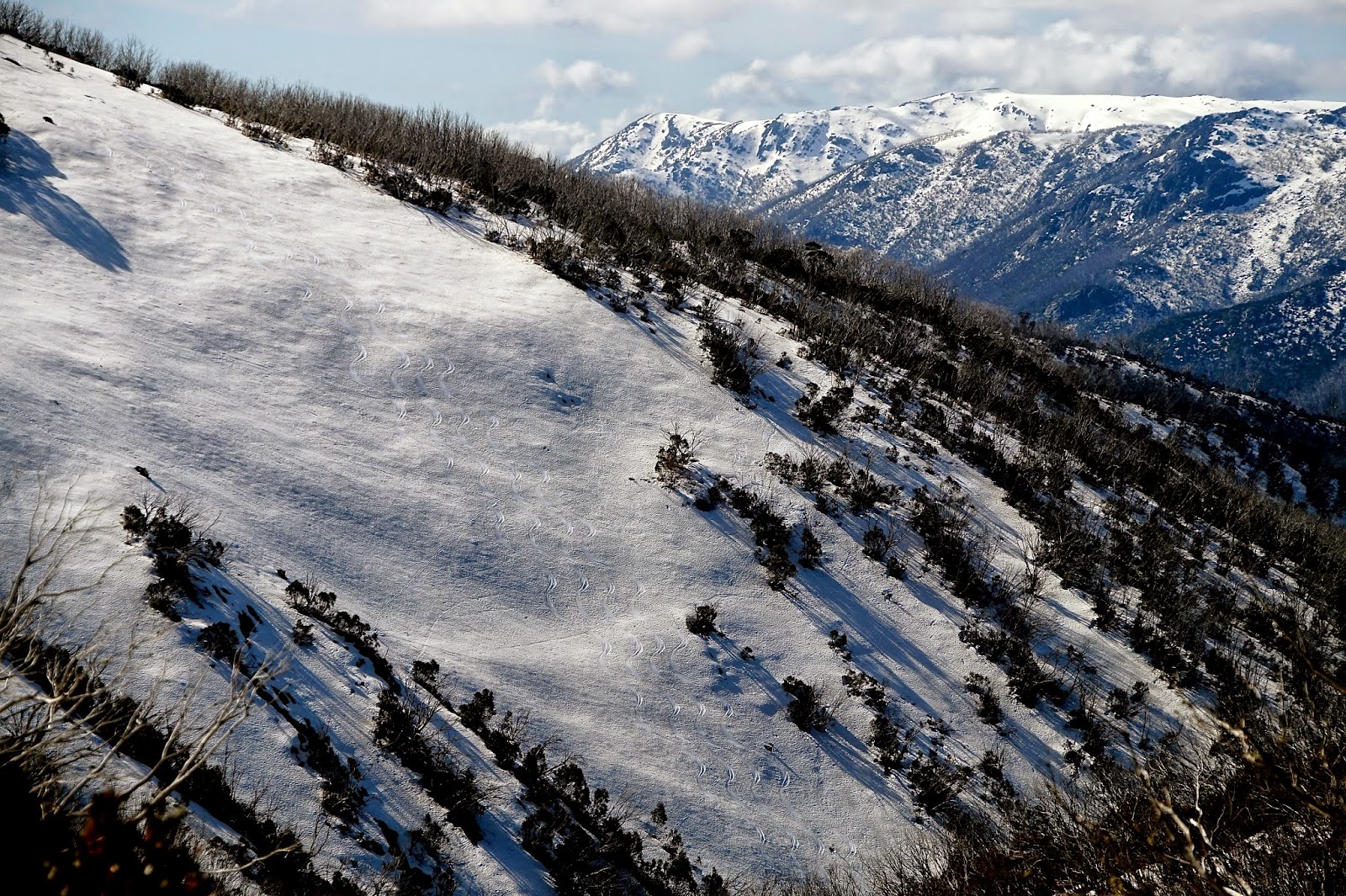 But that would have meant walking over skiing, and so I slowly started to make my way back home, back past this morning's lines, the way I'd come. By the time I eventually got back to the Ovlov, I was very close to crying. 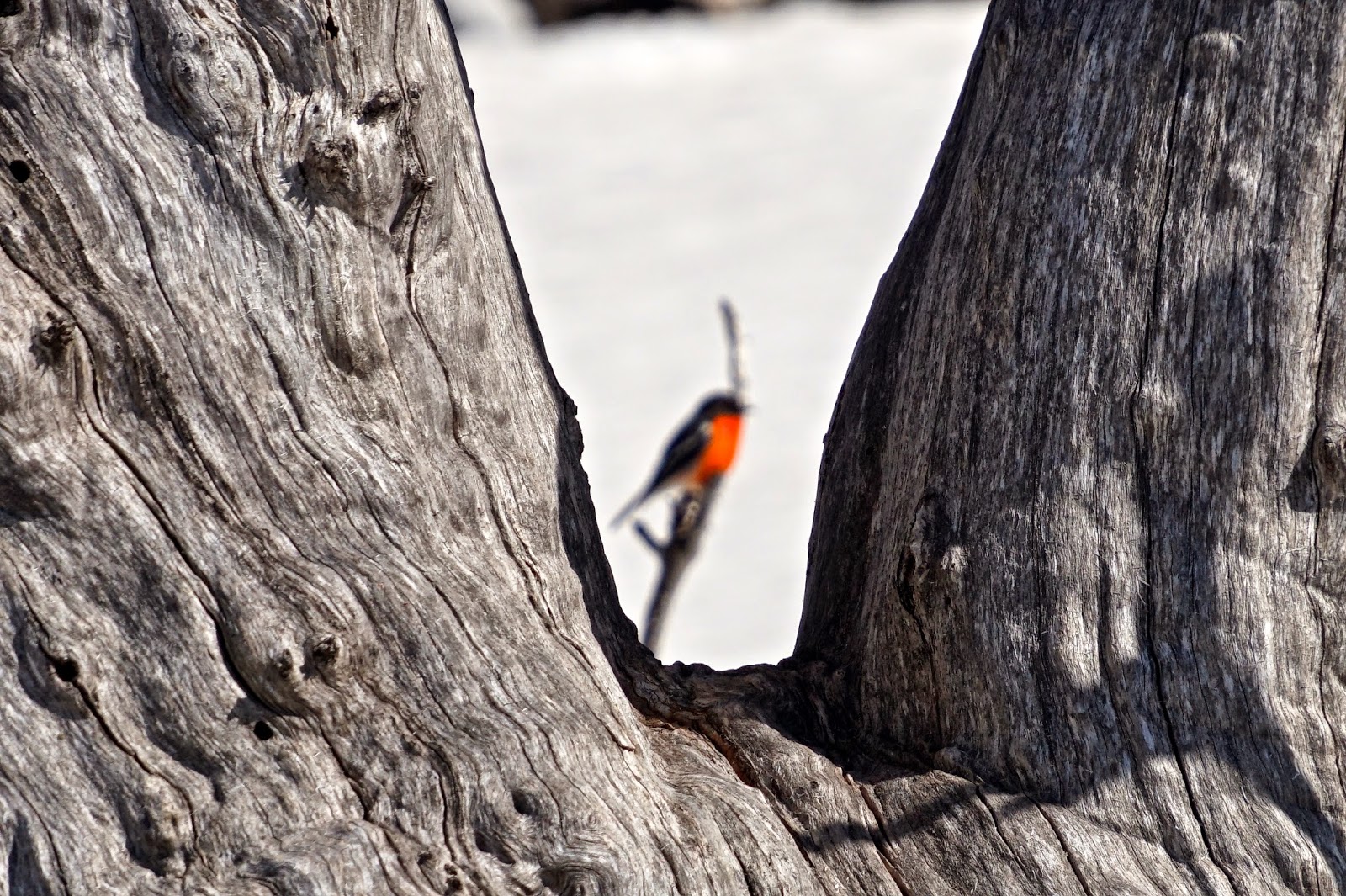 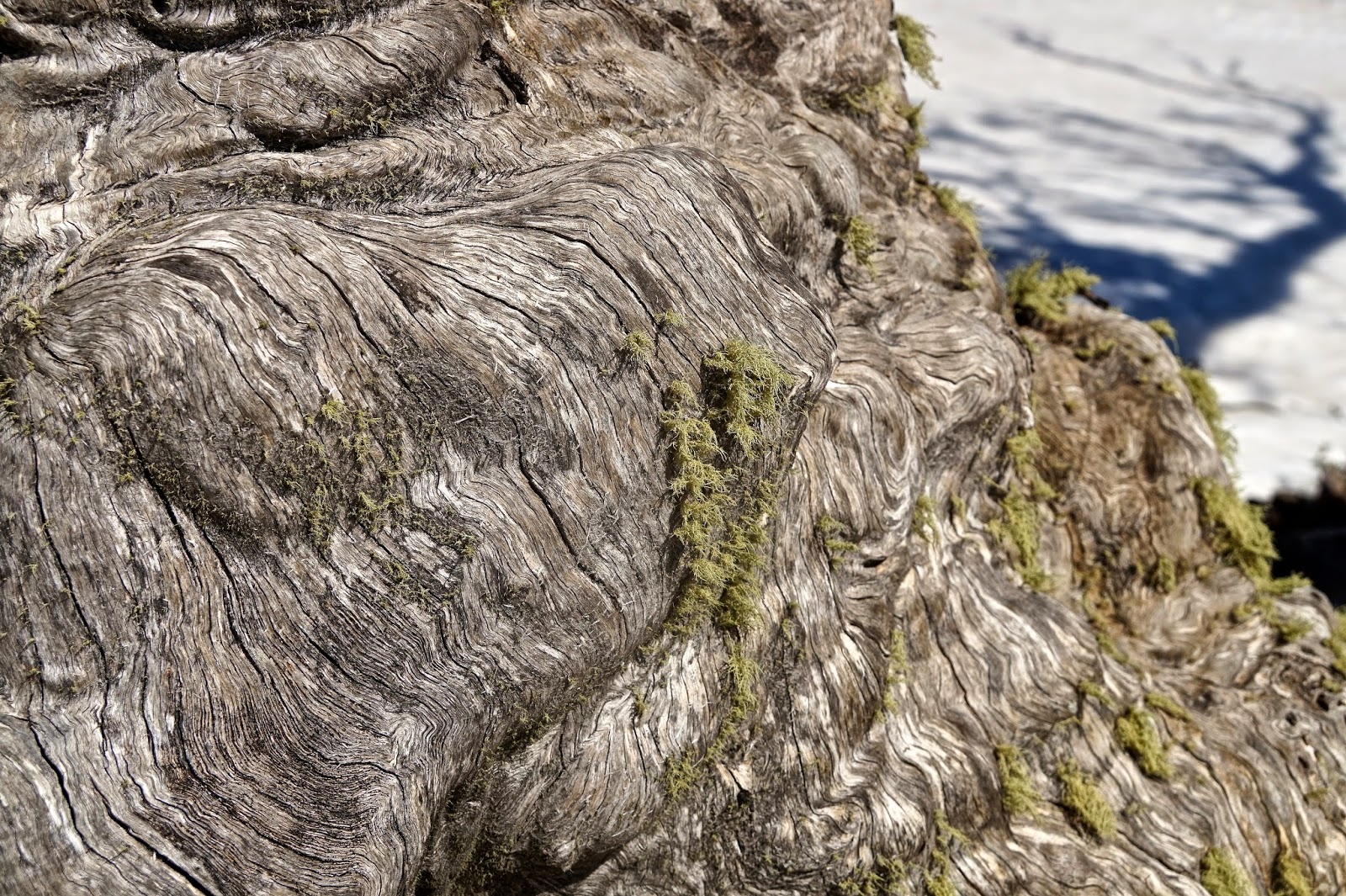 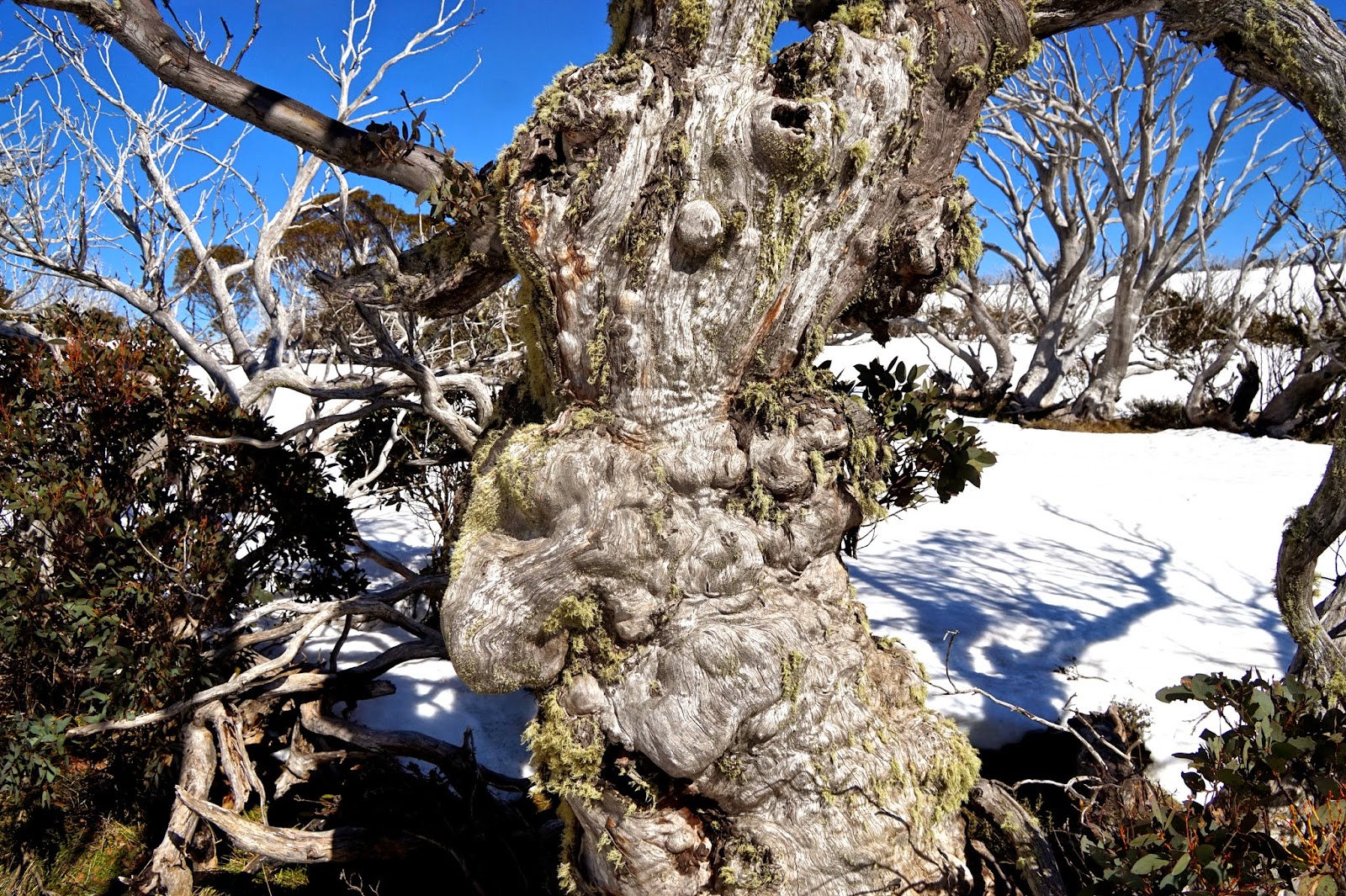 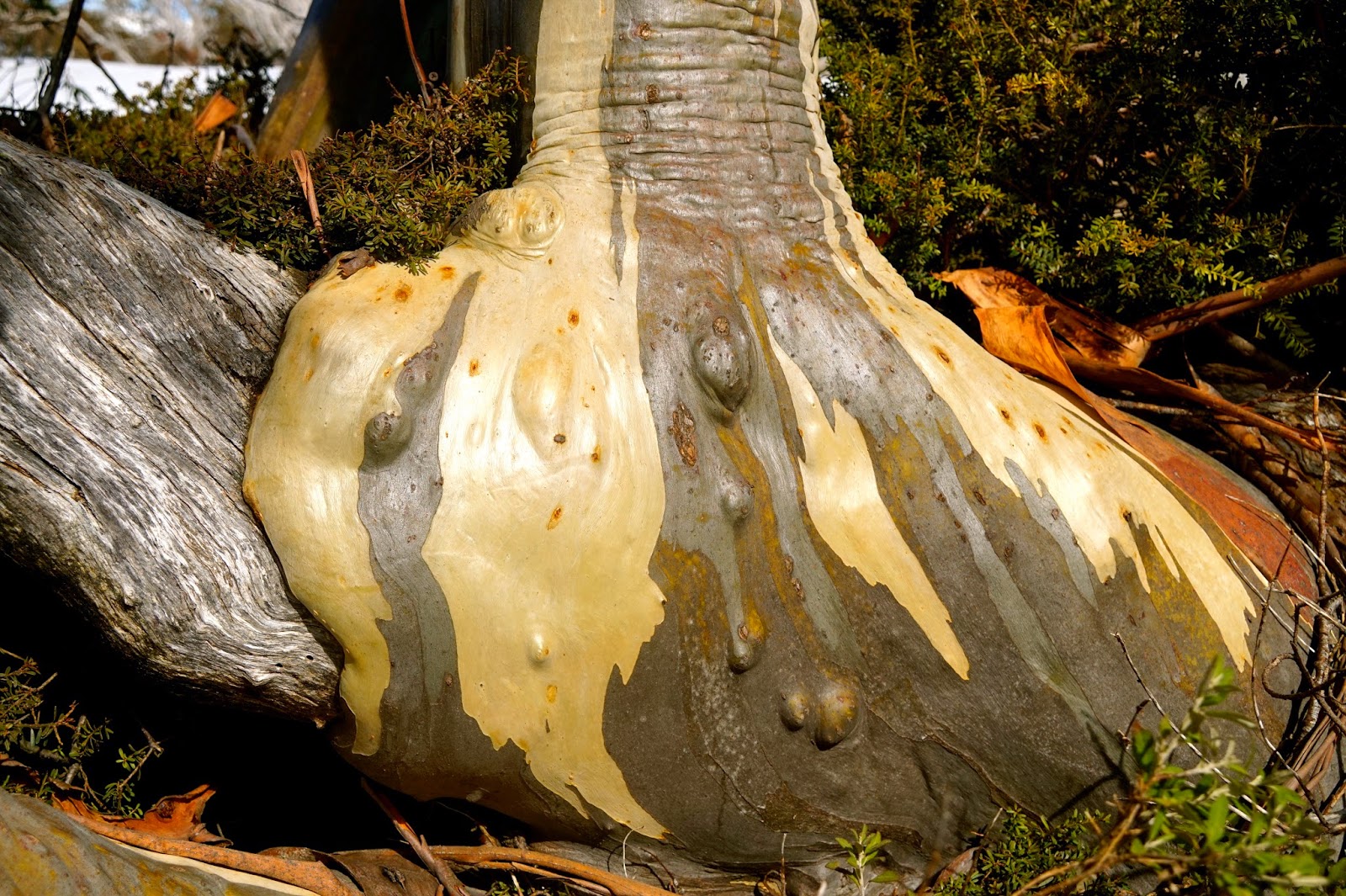 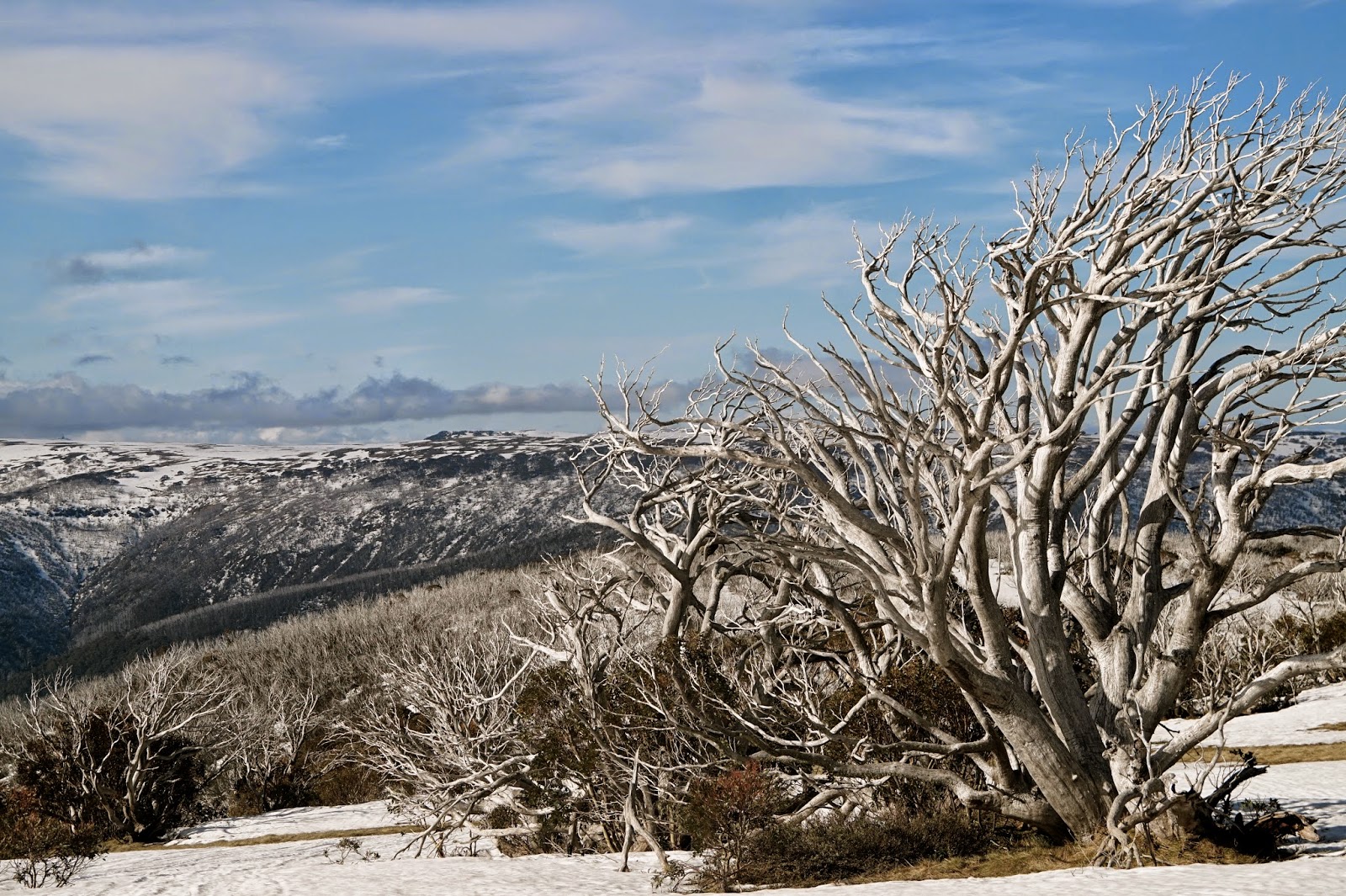 Or  something from Dr Suess... 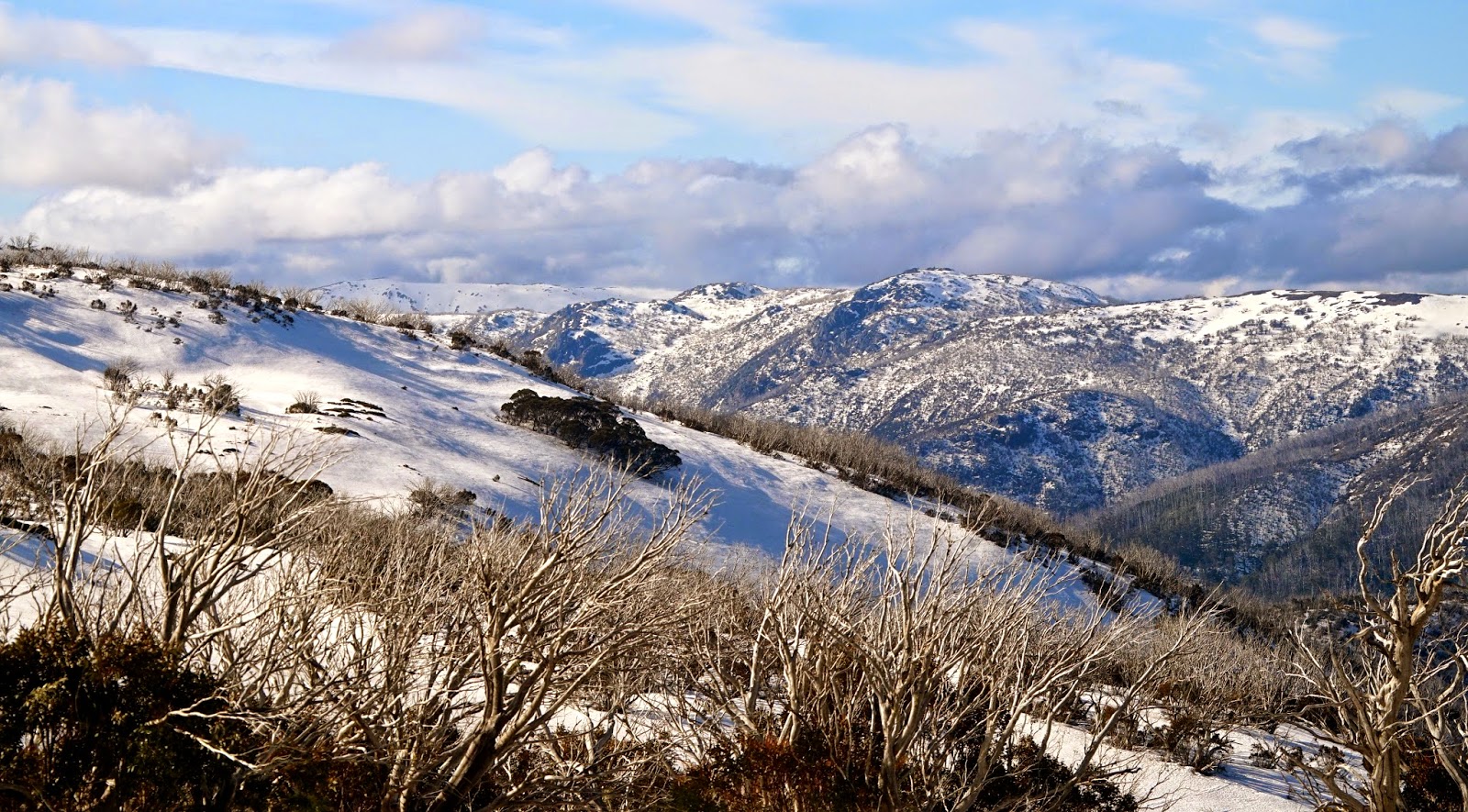 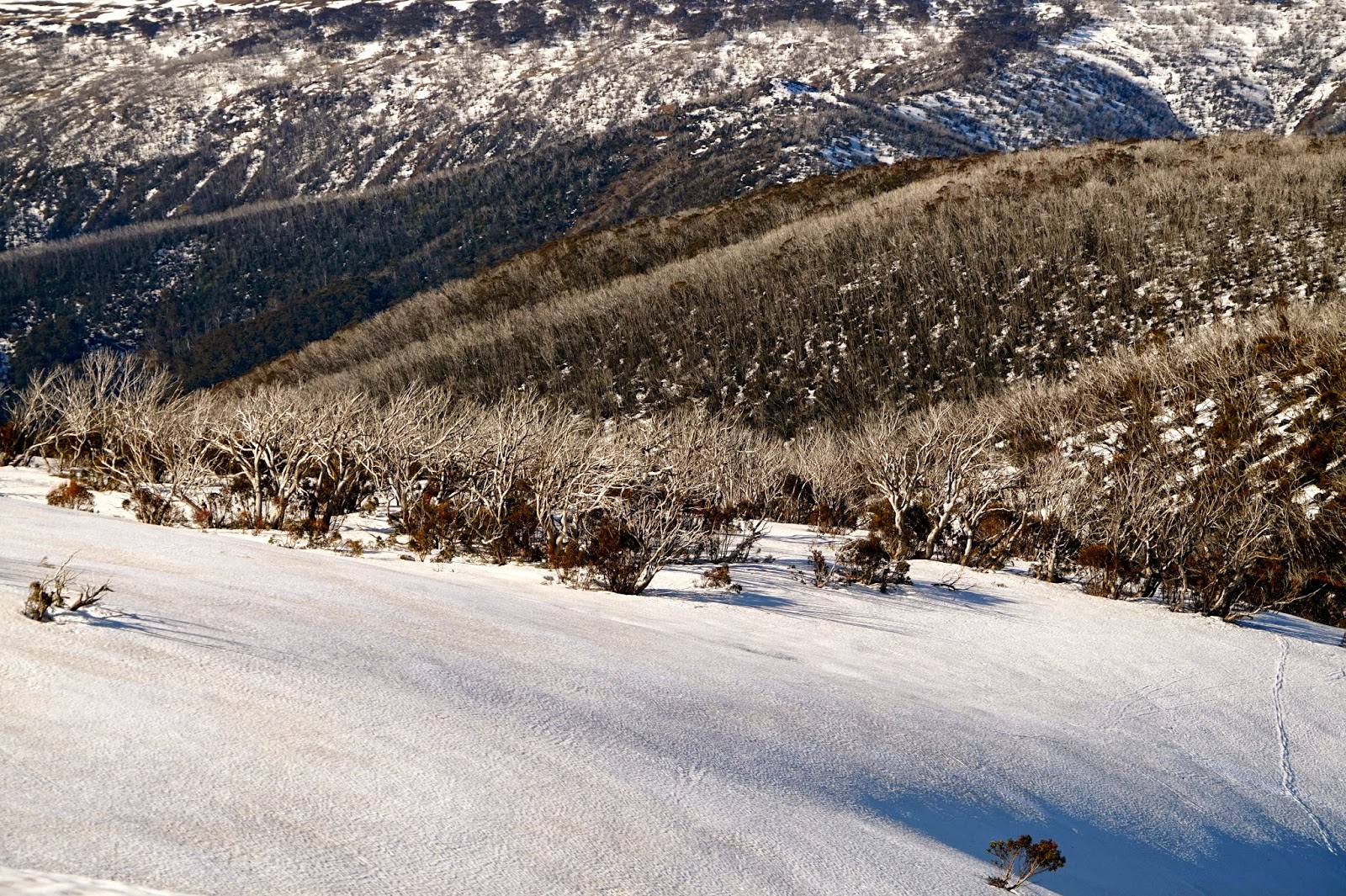 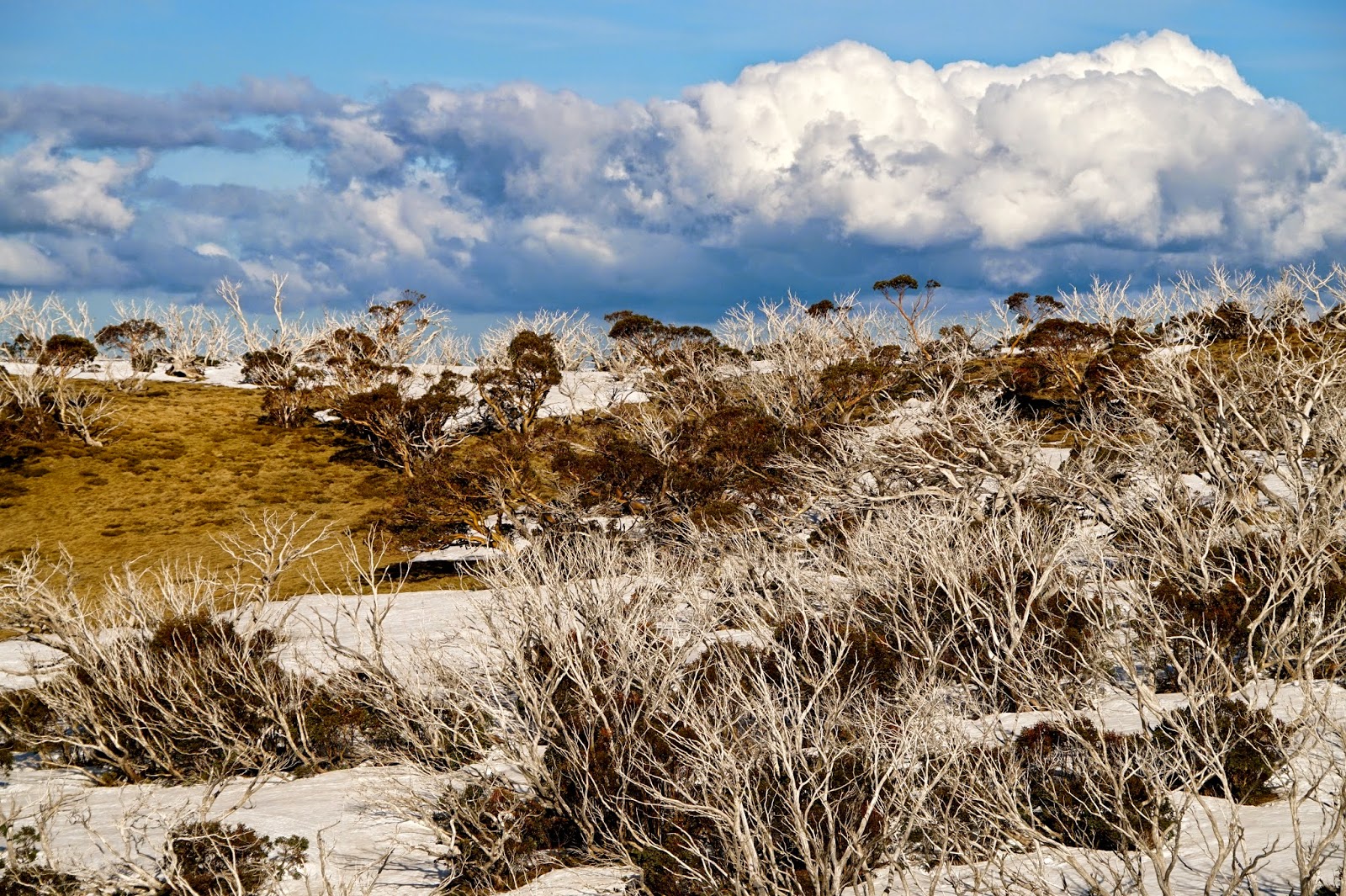 The light got nice as the snow started to crisp up again, rendering my pattern-bases fairly useless. But it was all very beautiful - and I had it all to myself. The moments belonged only to me and my legs. 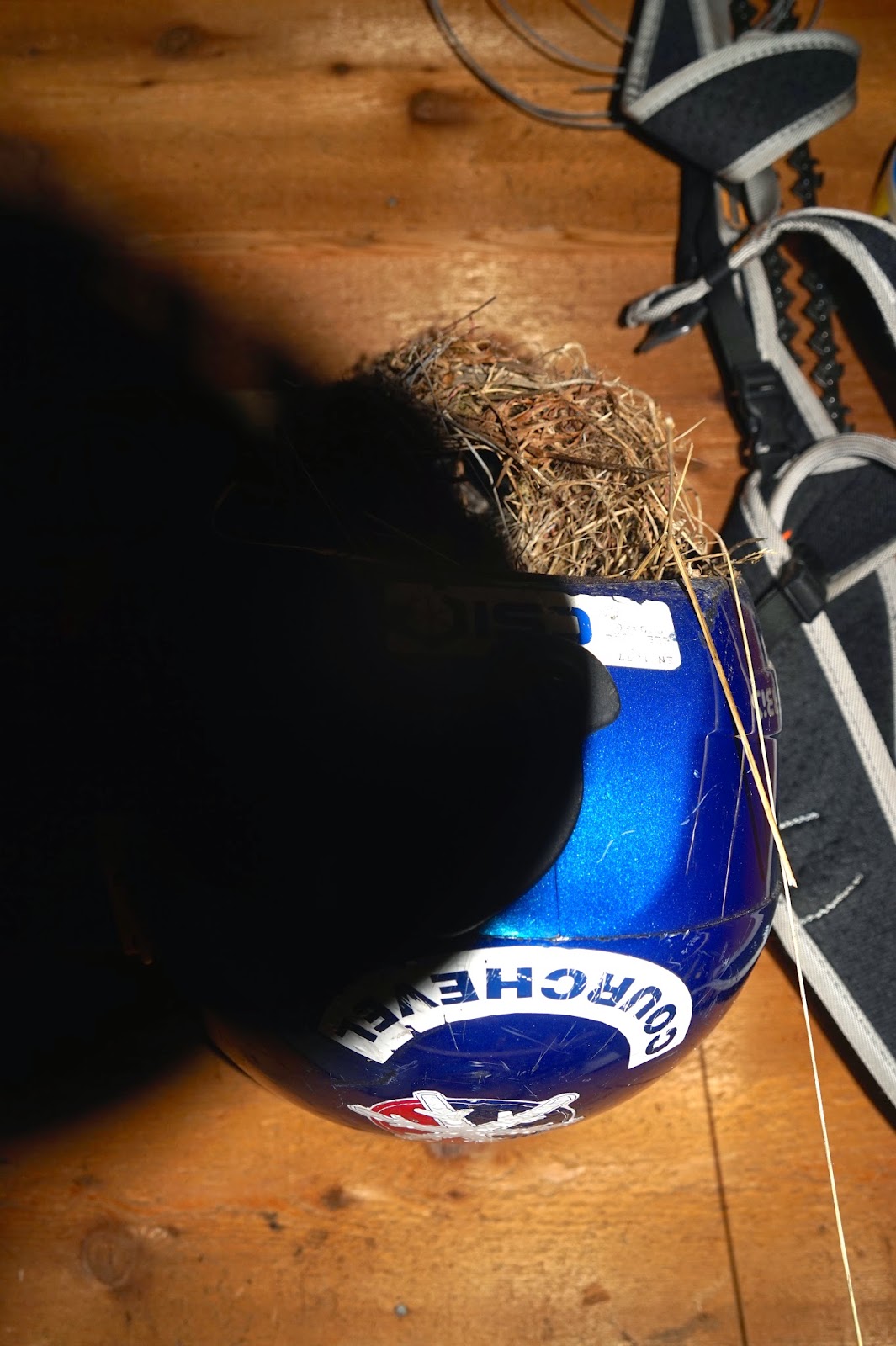 It must be spring because the birds are building nests in all kinds of strange places. After picking up the kids, we got back to DP to find my sister with Simon and their kids, my kids' cousins. Simon also had his mum and her new partner Roy out from England. We got the fire cranking, and Penny cooked up an absolute storm for us all. I ate and ate and ate and ate. I drank quite a bit too. The kids had a ball and went to sleep way after me I'm sure. 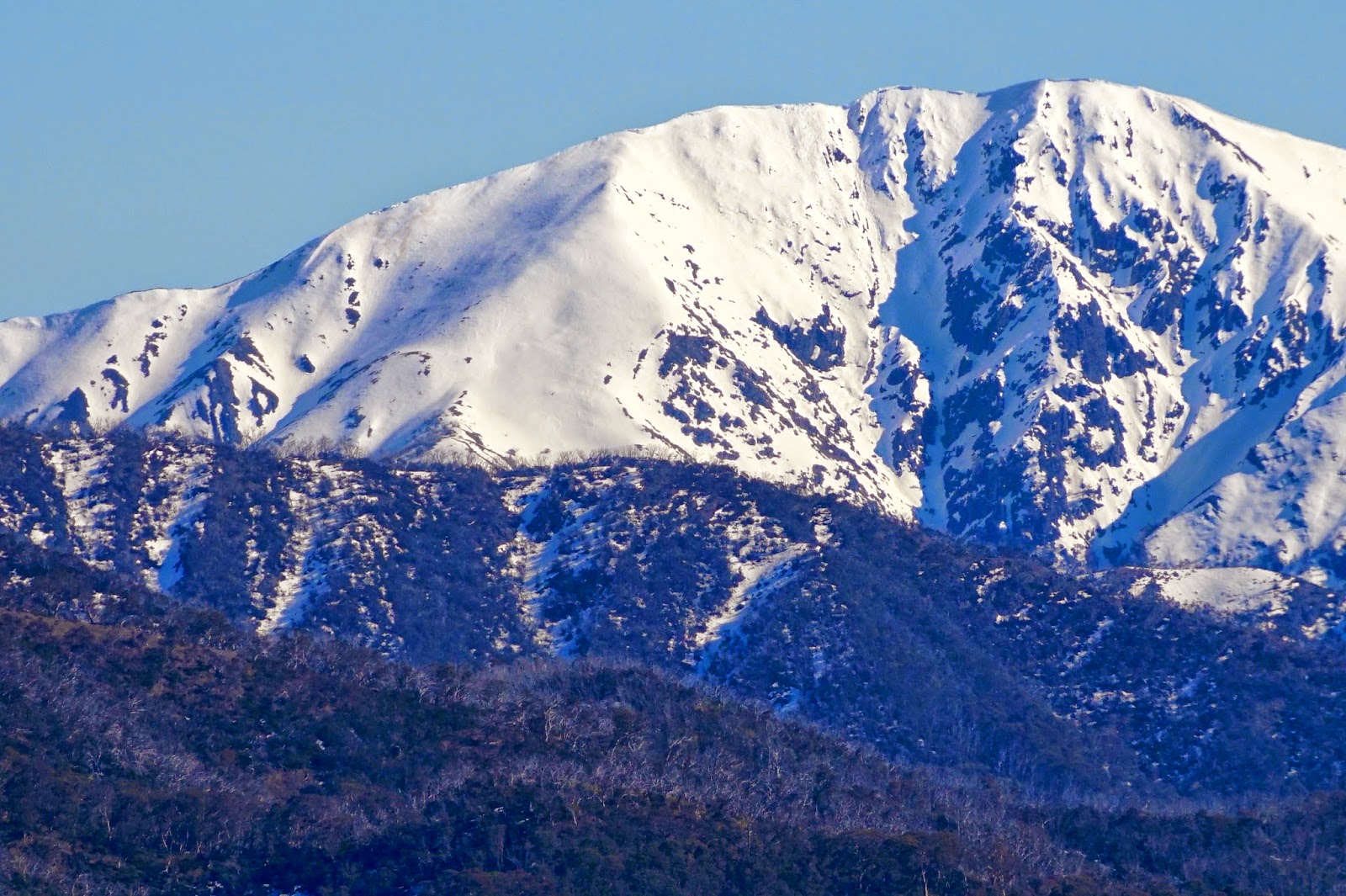 On Sunday morning I had a light run to Room With a View, and then on up to Dead Timber Hill for some superb views of Feather and yesterday's Workshops. 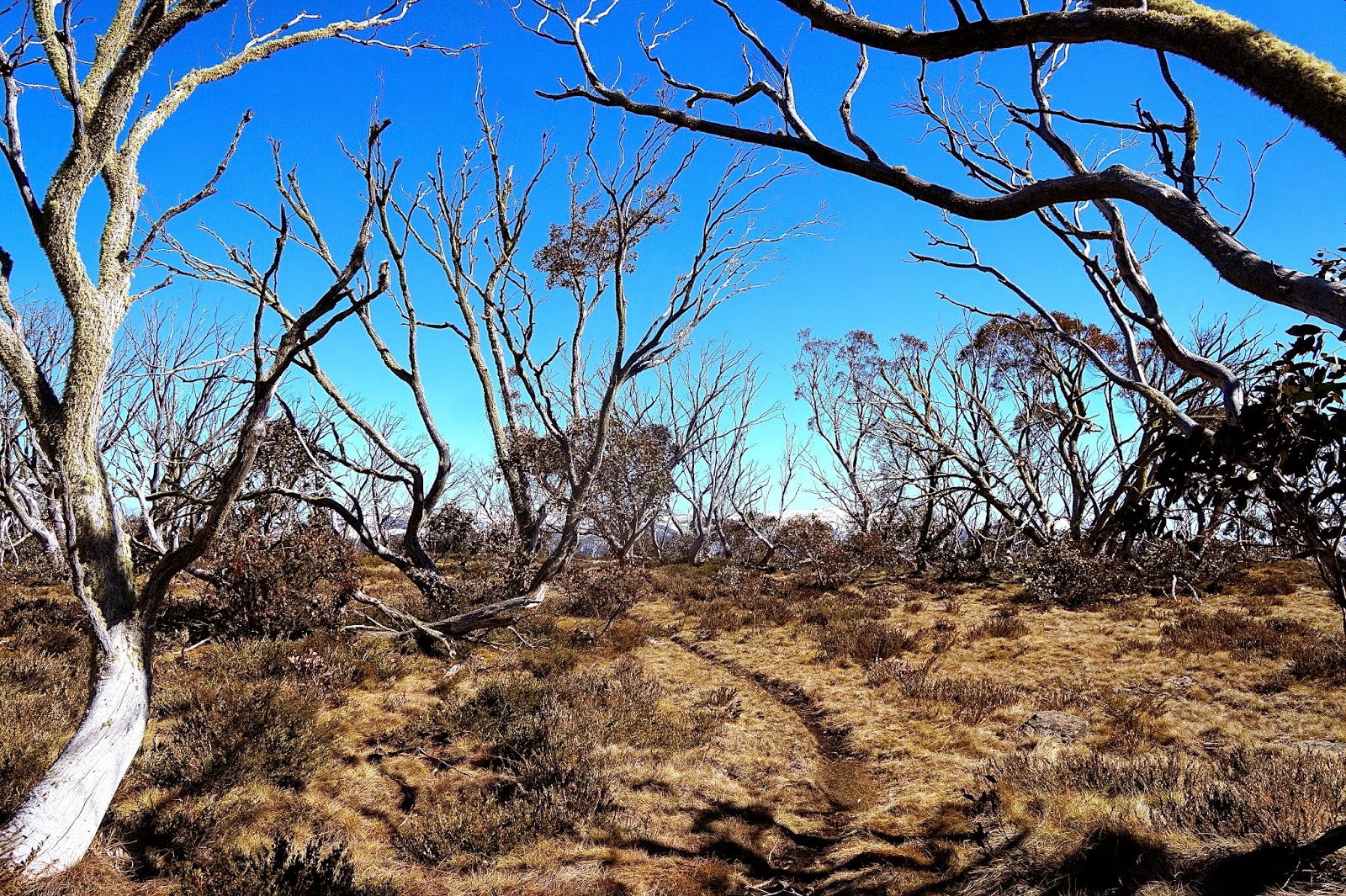 Dead Timber Hill above, with Goldilocks the chute below curving around to skiers' left. 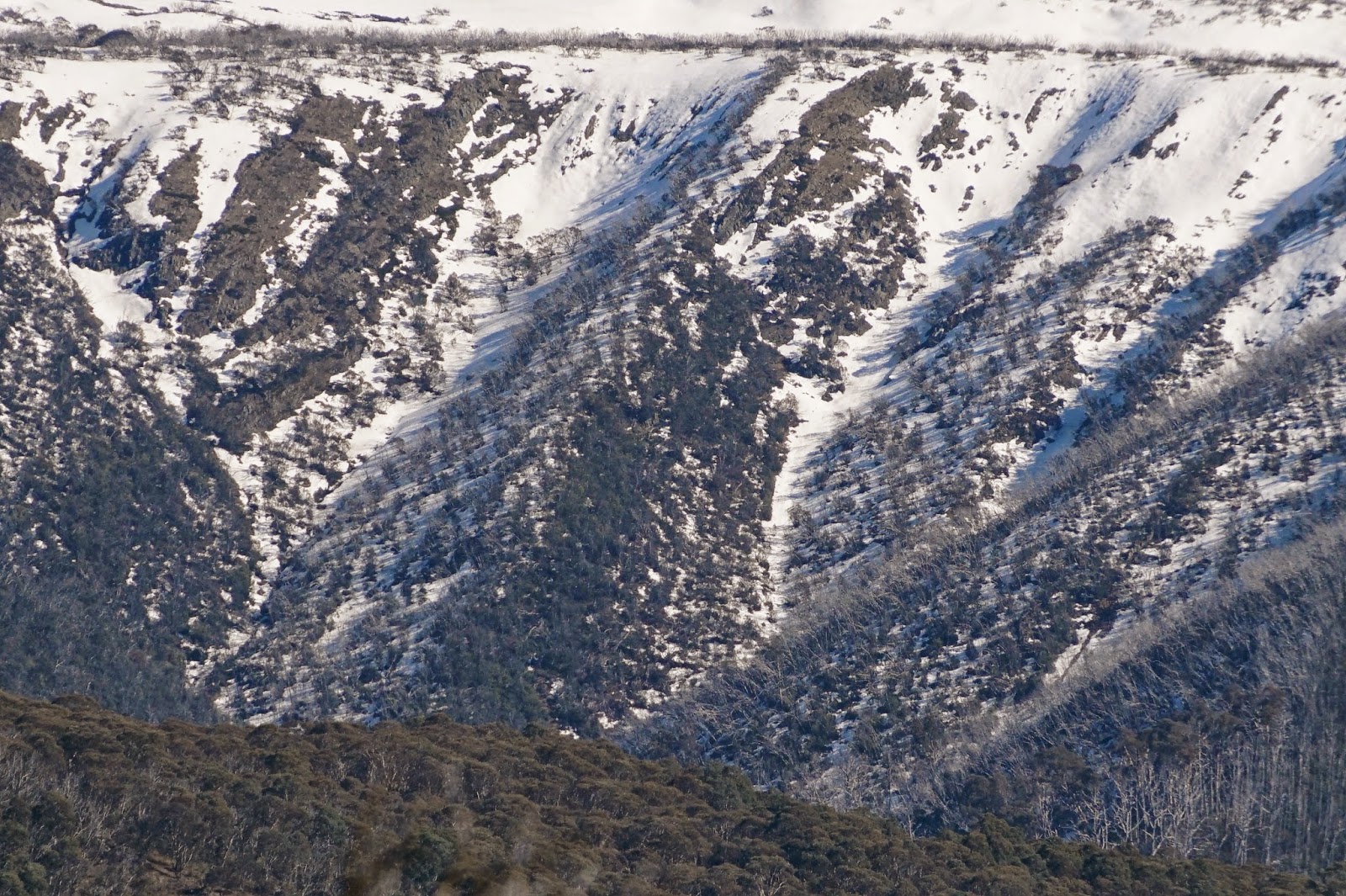 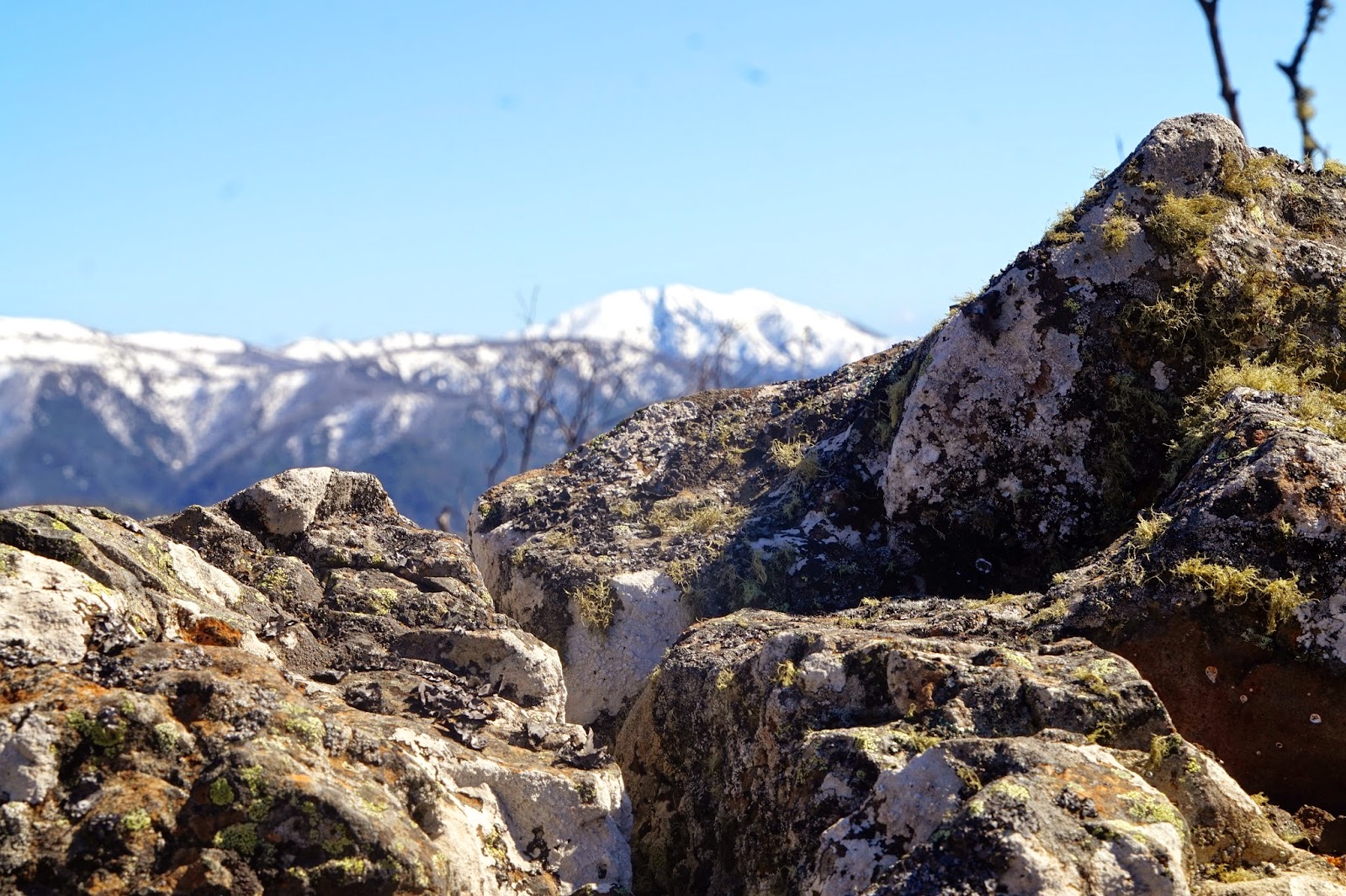 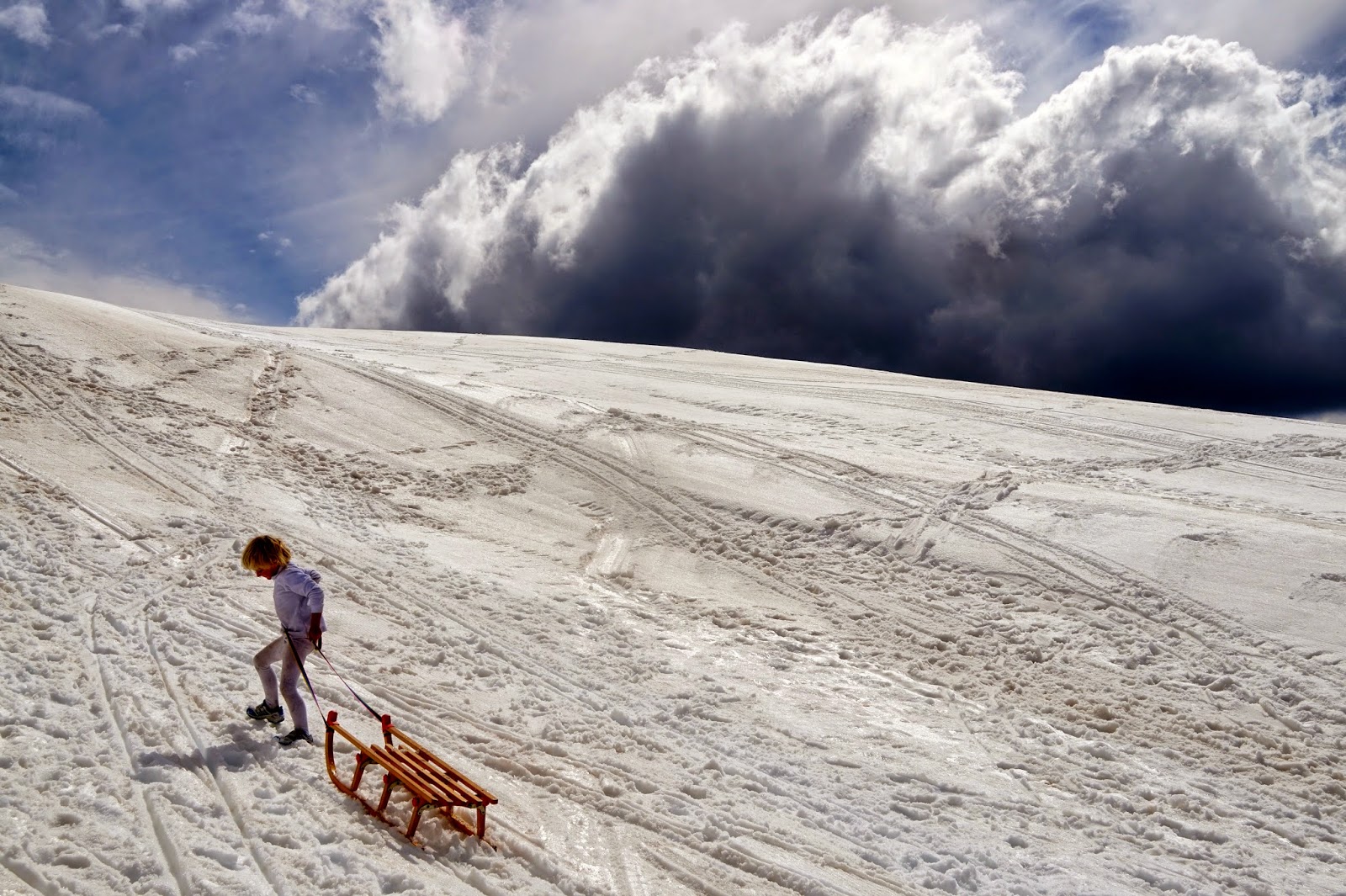 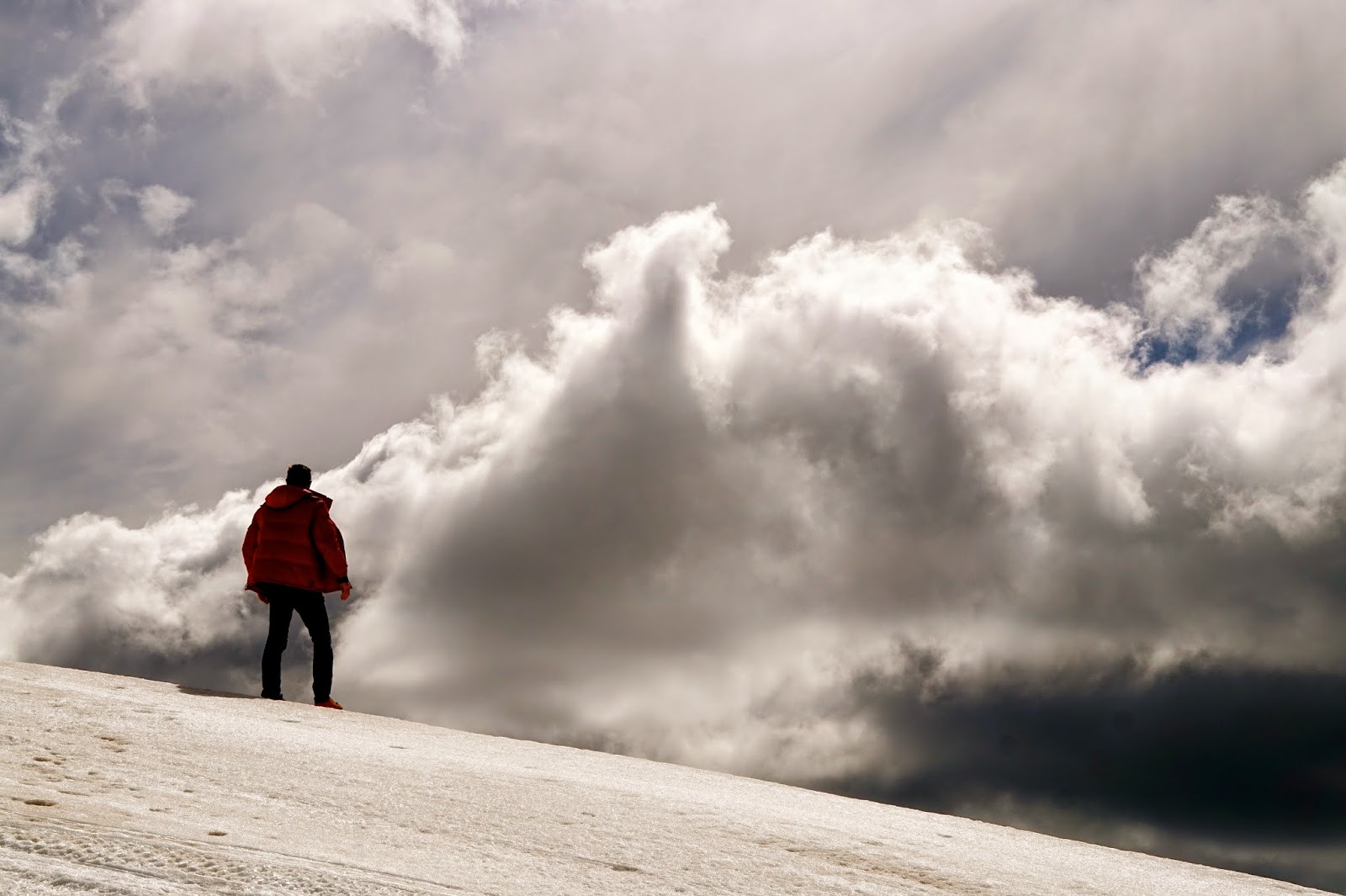 It was a mild day and we had a nice picnic up at the Cross, with the cousins mucking around on the toboggan. Some fantastic clouds were passing over. They were still harvesting snow, which means they're hoping to keep things limping along into the school holidays. For the boys, the digger and the truck made the entire trip worthwhile. 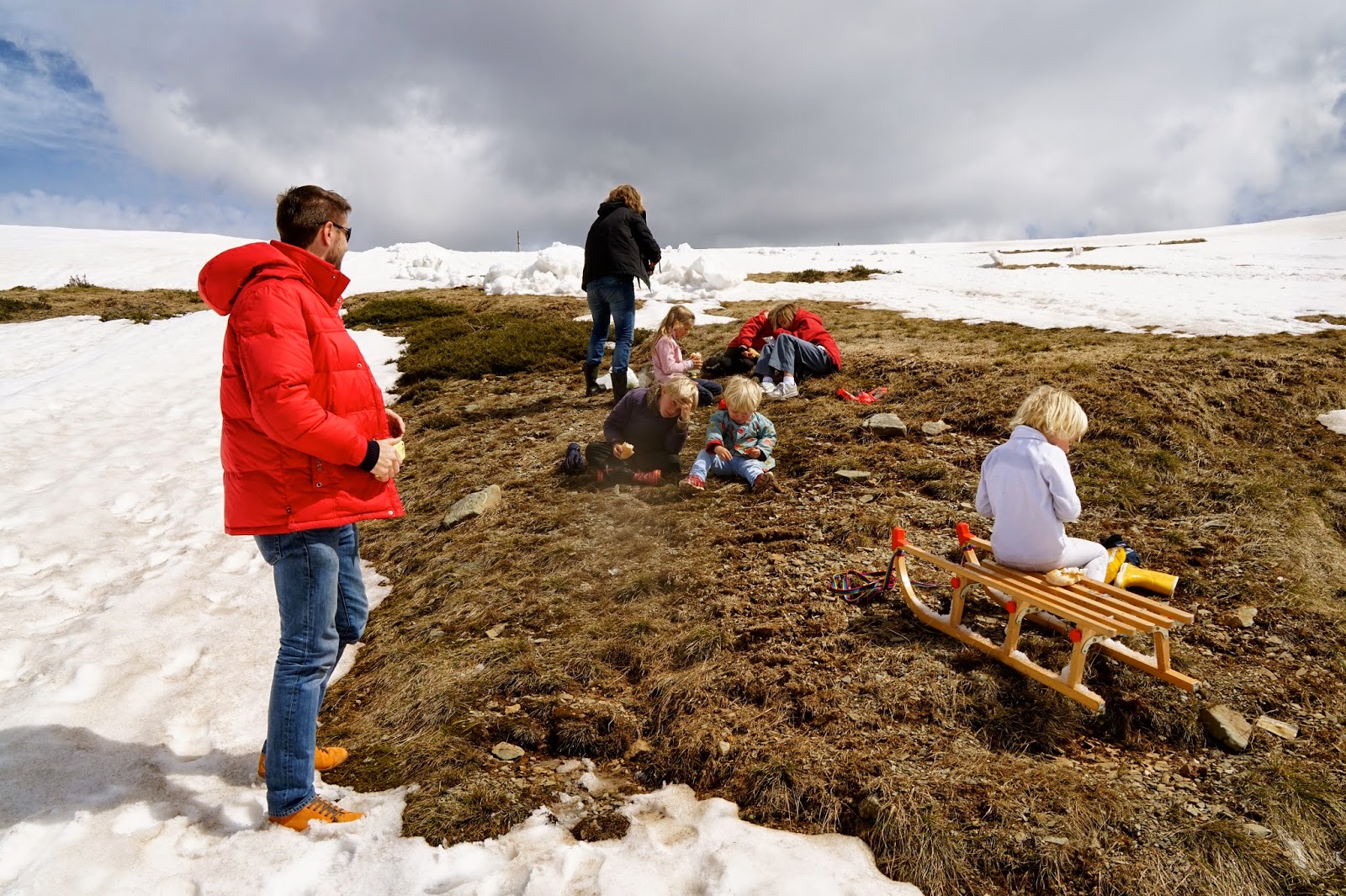 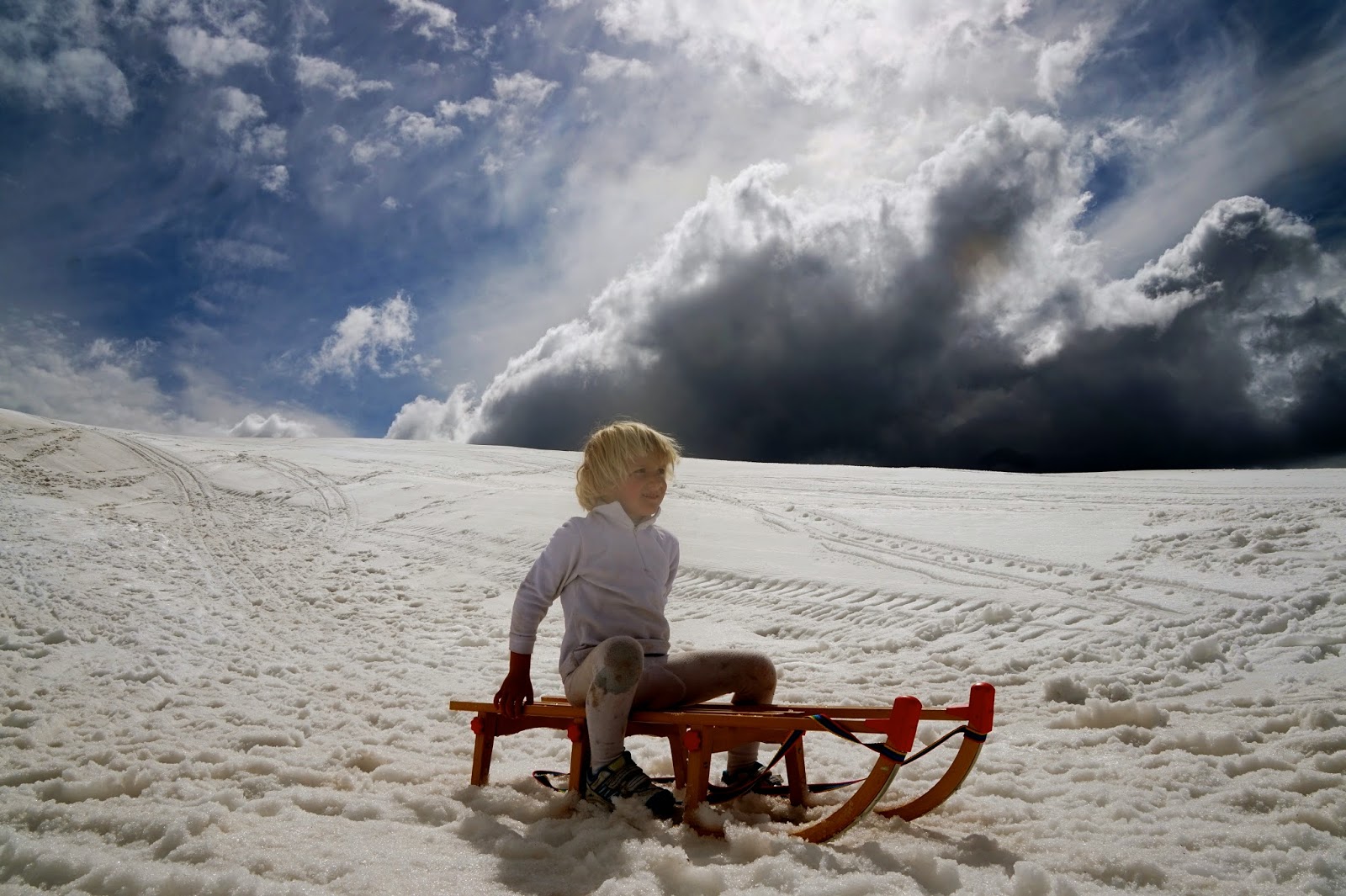 My son mucking around in his PJs, demonstrating some more appalling parenting. Just as well mummy comes home from France this week.